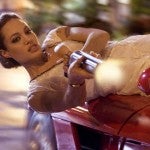 'Wanted 2' is a go--and soon. Director Tim Bekmambetov told the Russian newsite RIA Novosti that the film will begin production in July. When asked about a shooting start date, the Director said:

The real shocker is that Bekmambetov plans to ressurect Angelina Jolie's character, who died in the first film. No word, however, if Jolie will return for the sequel. 'Wanted 2' could also feature the return of Konstantin Khabenskiy's The Exterminator character. 'Wanted' centered on Wesly Gibson, whose dull life takes a 180 degree turn after he is recruited by a secret assaassins society called The Fraternity.

'Wanted 2' to Begin Production in June; Angelina Jolie to Return?