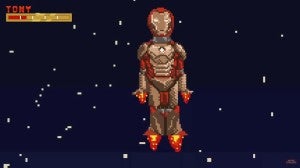 According to the MOVIECLIPS trailers crew on YouTube, a new, three-and-a-half minute video that recasts Iron Man 3 as a 16-bit animation "started as an art project, but quickly grew into a full blown homage to Iron Man 3, retro-games, and the 1990s."

The film, due out on DVD and Blu-ray in September, will soon be available digitally for fans who preordered the Blu-ray in advance from Wal-Mart and on digital streaming services like Flixster/Vudu. It's the year's top-grossing film and one of the twenty highest-grossing films of all time at the domestic box office.

You can check it the 16-bit video embedded below.