After Marvel Studios confirmed last year that Frank Castle, better known as the Punisher, would eventually be a part of their cinematic universe, fans have taken notice of some potential teasers and Easter Eggs in Marvel films and television productions hinting that the iconic vigilante with the skull-faced shirt could make an appearance any day now.

Marvel formally reacquired the rights to the Punisher, along with Ghost Rider, Daredevil and Blade, last year. Prior to this, the Punisher was featured in two films in 2004 and 2008 that were produced by Lionsgate. Since Marvel Studios got Frank back into the fold, rumors started circulating regarding a possible uncredited Castle cameo in Captain America: The Winter Soldier, while a prominent supporting cast character from the Punisher comic books was recently namedropped on Agents of S.H.I.E.L.D.

With eight new movies on the docket between now and 2020, and four new Netflix television series kicking off next year with Daredevil, there will be ample opportunity to work a more concrete Punisher appearance onto the big or small screen, which could, in turn, lead to some semblance of a full-length revival of the character. For now, here are five comic book stories that could seamlessly tie Punisher into the Marvel Cinematic Universe. 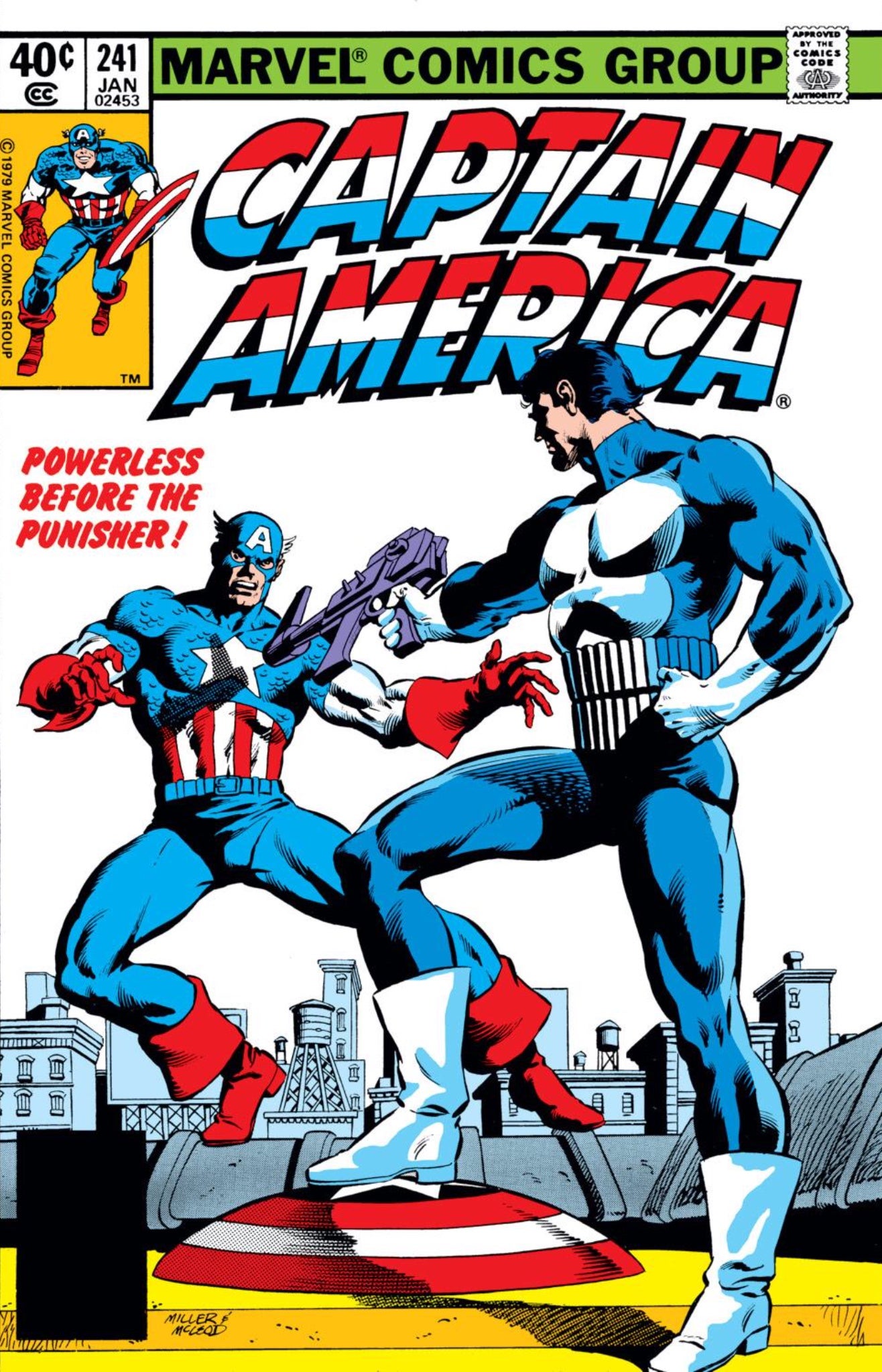 This 1980 story by Mike Barr and Frank Springer (with a gorgeous cover from Frank Miller) marks the very first time the Punisher and Captain America cross paths. And as one can imagine, the two have extraordinarily different philosophies towards crime fighting, which the issue explores in full.

Cap first encounters Frank Castle while patrolling the streets of Brooklyn. Captain America and Punisher are both chasing after the same mobster, but as is often the case whenever a traditional hero becomes intertwined with the Punisher, Cap finds himself ultimately trying to protect the criminal from being murdered in cold blood by Castle. When the duo come under heavy fire from other mobsters, Cap and Punisher agree to fight on the same side, rather than beat on each other. But it's a very short-lived alliance as Castle rightly knows that Cap will never let him take care of the crook the way he wants to (i.e., kill him). As Castle makes his getaway, Cap declares that the two are similar in that they are both fighting "personal wars," but because they will never see eye-to-eye with their methods, they are likely to remain enemies. 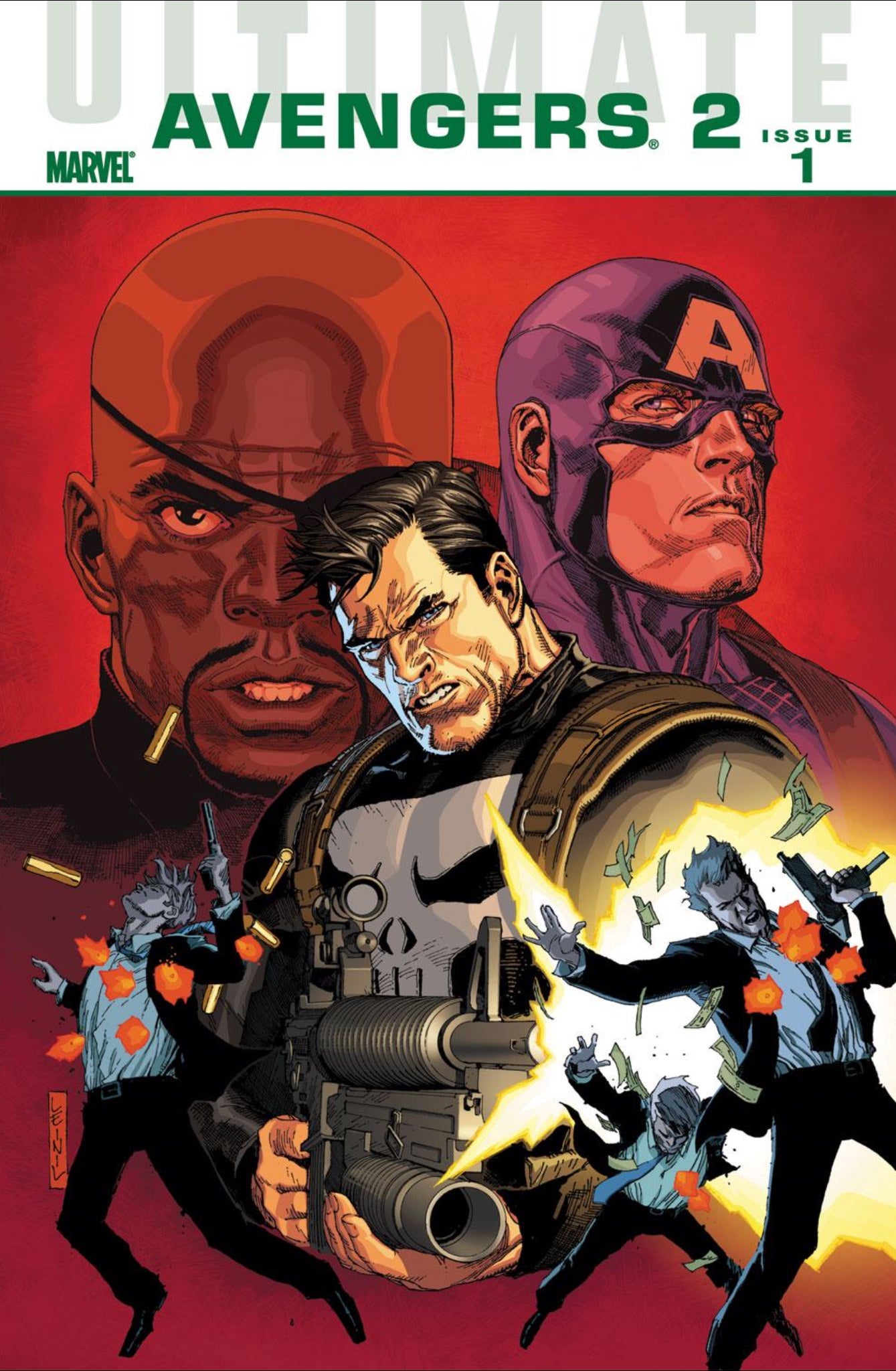 Transitioning over to Marvel's Ultimate Universe, in this Mark Millar story, the Punisher becomes a member of the Avengers – aka, Nick Fury's top secret black ops team that handles the "dirty work" that the more virtuous (if you can even call them that) Ultimates would never get involved with. Castle is recruited as a member of the Avengers (sort of) against his will when Captain America poses as a Russian mobster to lure him out only to capture him and brings him to Fury. But instead of executing Castle for all of the various crimes his committed (mobsters he's killed), Fury offers him a spot on his new team.

The Avengers are tasked with tracking down Ghost Rider. However, after participating in one mission with the Avengers, Castle realizes that any kind of organized do-gooding, is not in his blood, especially when he's not allowed to shoot to kill.

The Marvel Cinematic Universe iteration of Fury isn't quite as morally ambiguous as the Ultimate version (especially under Millar's pen), but some semblance of a "Crime and Punishment" adaptation could be an easy way for Marvel  to work the Punisher and a few other characters into its universe (i.e. Ghost Rider). 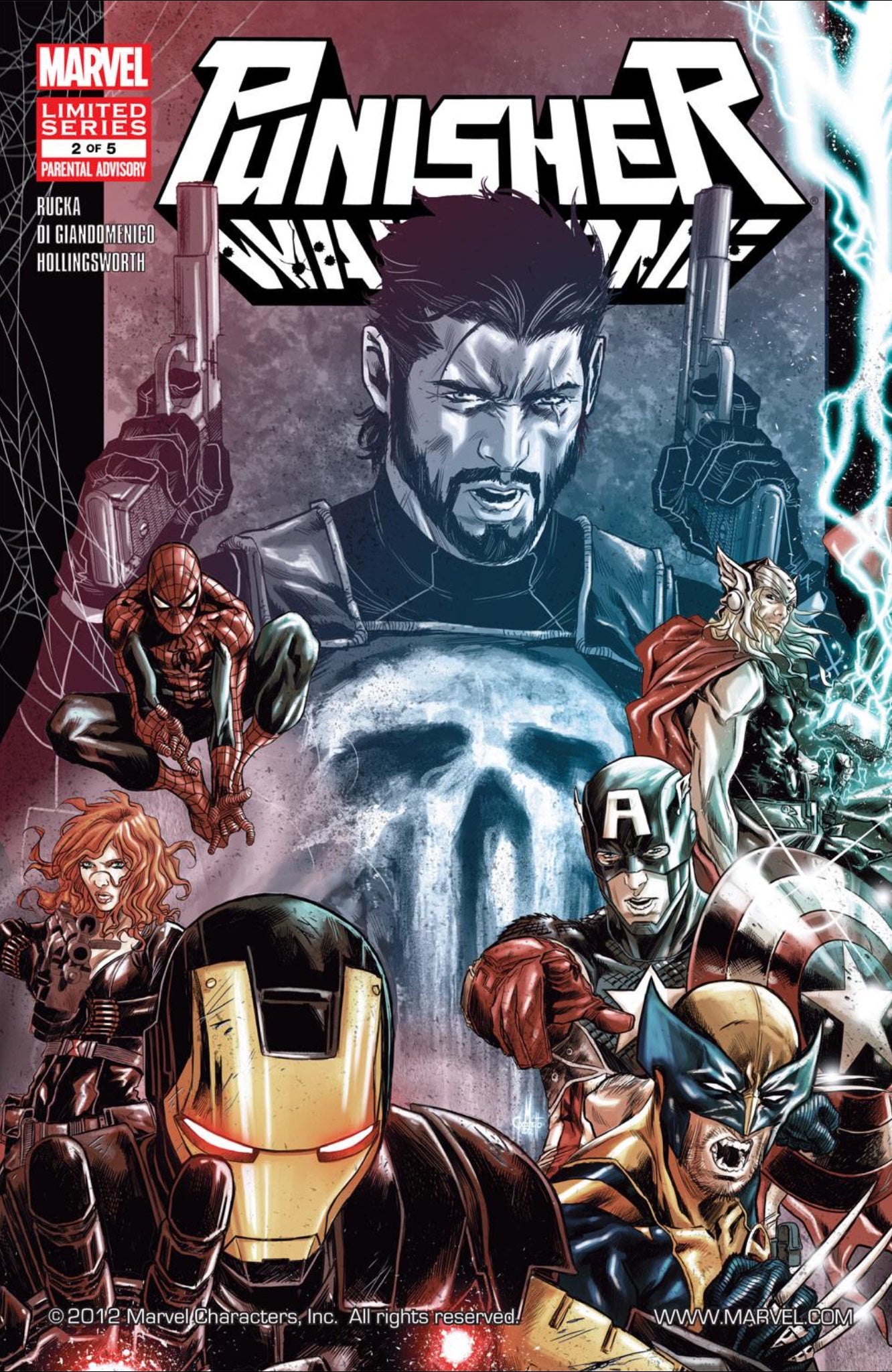 While the Punisher would have to be a firmly established part of the MCU for an adaptation of this Greg Rucka  2012-13 miniseries to make sense,  Punisher: War Zone is a great demonstration of what would happen if Castle finally ticked off "Earth's Mightiest Heroes" enough for them to band together and agree to take out the vigilante. After Punisher causes some problems trying to jailbreak another former U.S. Marine, Rachel Cole-Alves, Spider-Man goes to his Avengers teammates to tell them that enough is enough with the guy with the skull on his shirt. Tony Stark and a few of the others laugh off Spider-Man's complaints – Castle is just a guy with a gun anyway – but Captain America agrees that Castle and his psychotic methods pose a real threat to how they do business.

Castle gets a head start on the Avengers thanks to a tip from Wolverine, but eventually has a one-on-one confrontation with all of the Avengers. He even gets to share a brew with Thor, and he steals a set of Stark's Iron Man armor, which finally gets the sarcastic billionaire to take Castle seriously.

While it's always possible that the Punisher will find himself aligned to the Avengers in the MCU, it's more likely that he and his murdering ways will find himself at odds with Earth's Mightiest Heroes. If that's the case, Punisher: War Zone needs to be mined for in content. 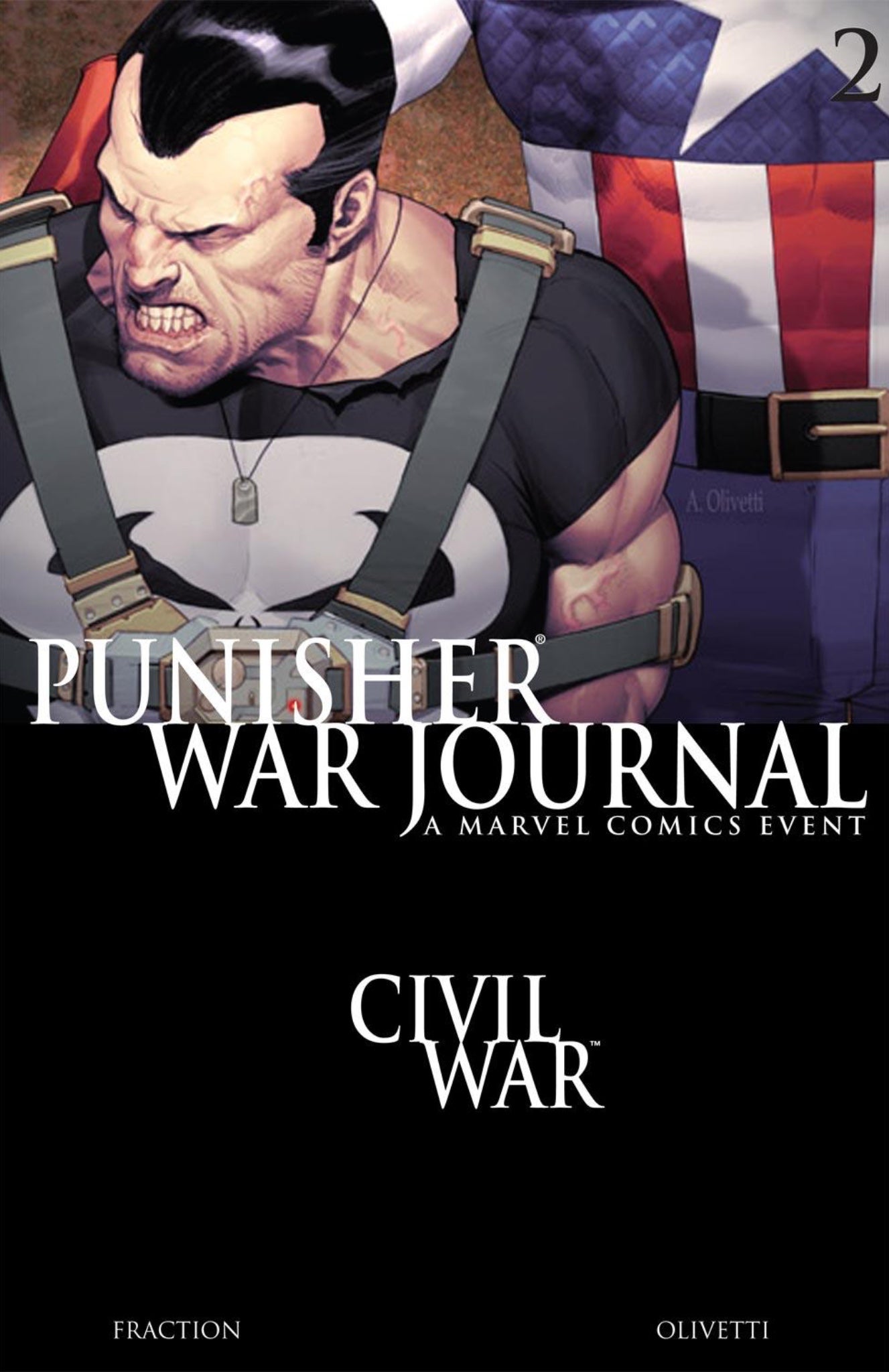 Punisher plays a role in the main Civil War miniseries, but Matt Fraction and Ariel Olivetti collaborated to deliver a more in-depth look at which side Castle chose in the war over the Superhuman Registration Act. Unsurprisingly, the lone wolf Punisher originally resists forging an alliance with either group, but Captain America recognizes a loyal soldier when he sees one and makes a hard push to get Castle on board with his Secret Avengers. This partnership goes about as well as one should expect – even Luke Cage warns Cap that "if you lie down with dogs, you get up with fleas." As such, Cap learns the hard way that you can't take the deranged sociopath out of the Punisher when Castle defies orders and murders a couple of legit supervillains who are fighting alongside the Secret Avengers.

With Captain America 3 already confirmed to be an adaptation of Civil War, bringing in someone of Castle's character and personality in the war between Cap and Iron Man could be a really easy way to add some tension and drama to the film. Additionally, this Punisher War Journal arc attempts to explore the military relationship between Castle (a former U.S. Marine) and the ultimate soldier, Cap. Marvel Studios would be wise to borrow elements of that character dynamic if it intends to bring Captain America and Punisher together in the same film. 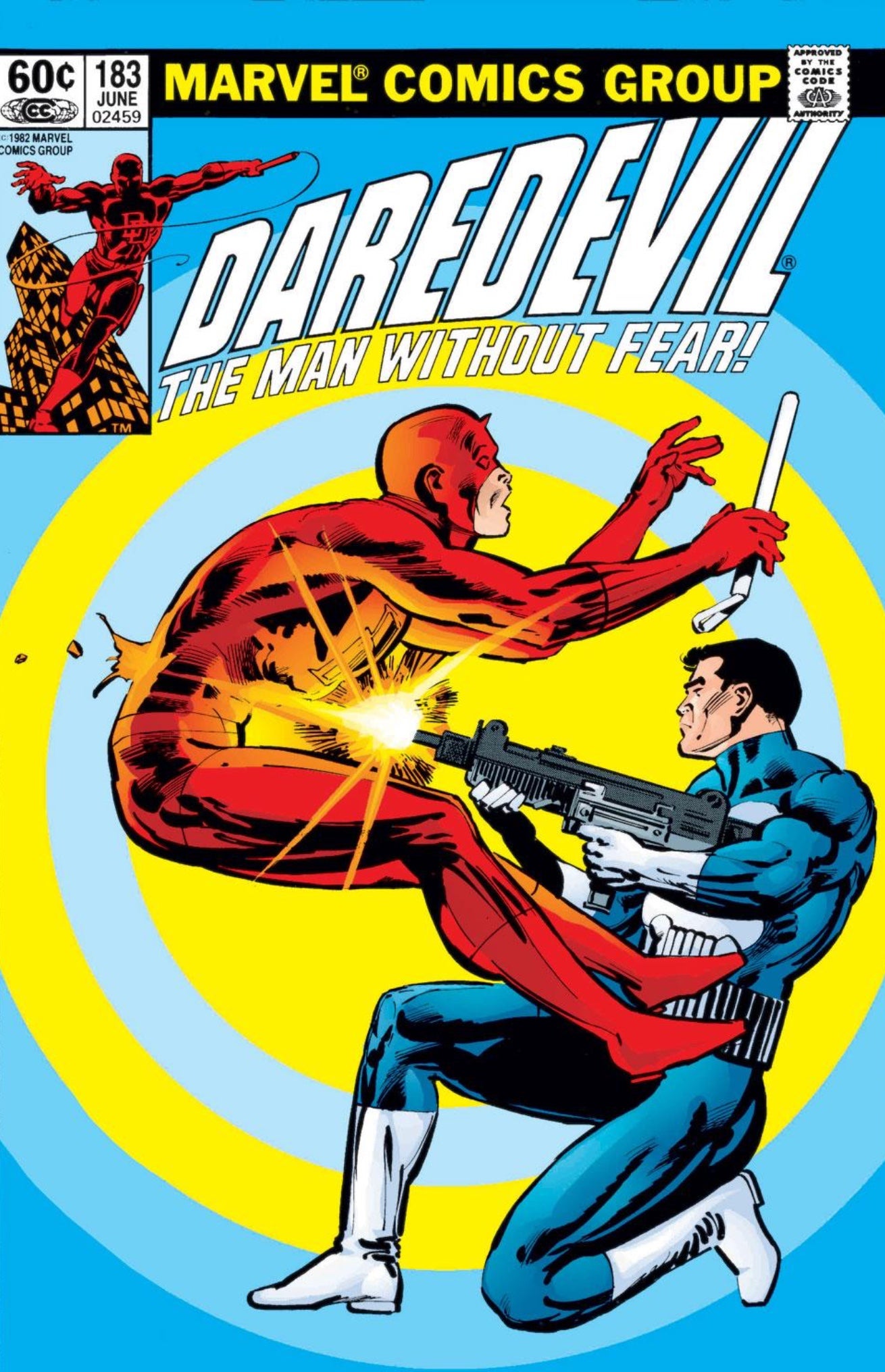 With Daredevil set to debut on Netflix next year, adapting this legendary Frank Miller/Klaus Janson storyline could be the fastest and probably most logical/entertaining way to officially introduce the Punisher into the MCU.

Publishing in the immediate aftermath of Daredevil #181, aka the issue that killed off Matt Murdock's former lover-turned-enemy, Elektra, Daredevil is in an emotionally tenuous place when Miller decides to dust the mothballs off the underutilized Punisher and make him a critical part of the "Man Without Fear's" dark and seedy Hell's Kitchen world. And the two make perfect adversaries: Murdock, an attorney, has an idealistic view on letting the legal system sort out the world of crime and punishment, and even defends a number of known crooks in the courtroom, while Punisher has appointed himself judge, jury and executioner for all of the evil in the world. Daredevil is smart enough to realize that Castle will never intentionally try to kill him because he's not a criminal, but that doesn't make Punisher any less of a headache, especially when both characters are chasing after the same drug pusher.

Punisher's role in Miller's Daredevil is often cited as the beginning of the character's rise to superstardom – a period that made the character a top seller throughout the late 1980s and early 90s (at one point, there were as many as four different Punisher books in the marketplace). Bringing Punisher into the world of Daredevil, also opened up a whole new playground for the character, and kicked off the start of a violently adversarial relationship between Castle and Daredevil's chief rogue, Wilson Fisk, aka the Kingpin of crime.

Based on some of the early reports and set photos, it appears that Daredevil on Netflix will be heavily inspired by Miller's run (as it should; it's one of the greatest runs in comics). So why not just go all the way and bring the Punisher into the mix?

Welcome Back Frank: 5 Stories that Connect the Punisher to the MCU

Nightbooks Star Krysten Ritter Shares Her Ideas for a Sequel