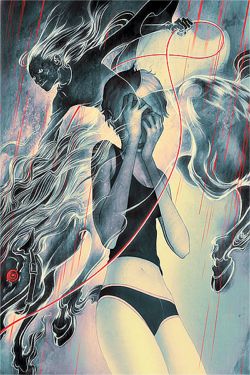 With the recent announcement that ABC was developing a pilot episode for Fables and making it an ongoing, hour-long drama for the 2009-2010 season, devoted fans of the quirky and clever series, myself included, are left waiting with held breath for future announcements about the cast, possible plot lines, etc. With that in mind, and with development still down the line, here are some solid suggestions for the ABC network to consider with regards to making fans happy while bringing in the uninitiated.

1. Cast some unknowns as leads. With confirmed characters such as the Big Bad Wolf and Snow White, it’s incumbent upon ABC to cast actors who will step into these roles with no projection of expectation of either playing as or against type by the audience. Viewers new to the show will quickly realize that these are not the sweet, innocent fables and fairy tales of their youth, so all the more reason to let a new actor inhabit and get comfortable with introducing these new “mundies” into the complex relationships amongst the residents of Fabletown. For fans of the series, casting unknowns helps to cut down on the possible “Oh no, not HER” or “Yes, this show will ROCK because of her” comments. ABC will win in that regard, as character names alone will draw the curious and familiar into the show based on premise and title. Big names are a non-issue.

2. Make the pilot a 2-hour movie. Anyone who has read just the first story arc of Fables knows that a lot goes on in those five issues: the establishing of the characters, their roles, and a good amount of intrigue into the shocking crime involving Rose Red. This story arc would be an ideal jumping off point for the story, as it gets us right into the thick of the action and even allows Prince Charming to make his lecherous debut. There’s enough dark humor mixed in with the seriousness of this first storyline to hook viewers in to the fascinating and complicated mythos that makes this series what it is. Two hours will allow a solid mystery story to take off and the case of Rose Red and Jack certainly provides enough fodder along with giving solid introductions to the cast on how they got to Fabletown in the first place.

3. Avoid stunt cameos. What has made Fables the darling of the Vertigo Comics line is the fact that it has so successfully avoided being a gimmick. Readers authentically care about and want to know these characters and their storylines. ABC should take the same consideration that Willingham has given his characters when it comes to casting guest stars. Don’t turn Fables the TV series into the next Will and Grace or Friends, where every other week there was a celebrity doing nothing but sucking up precious oxygen the studio audience could have used to laugh at jokes that were funny and not based on a stunt. Some characters may have to be relegated to special appearance status, Sinbad for example, and should not be used as an excuse to cast someone ridiculous for a part that may only last an episode or two. It’ll come across as phony and the last thing that Willingham probably wants is someone’s star status taking away from the world of these already larger than life characters.

4. Go ahead and reveal The Adversary early on. Revealed around issue 40 of the series, The Adversary, the mysterious name for the ruler who drove the Fables to seek out the mundane world, is the basis for a large percentage of what has happened in the Fables series as a whole. Even though comic book fans had to wait until well into the series run to learn his shocking identity, TV viewers will need to know early on in season one. One obvious reason is because so many fans of the comics may be too tempted to spill the beans early. Another is that it's just too easy with any search engine to figure it out. It would also allow the writers of the show to integrate some storylines that come later in the series, The Wooden Soldiers perhaps, earlier than anticipated. This would open the door for more interplay between the world of Fables and the mundie world and could set up some outstanding character development, especially with the Boy Blue/ Red Riding Hood storylines. The tension and espionage that have become part of the later issues could serve as an interesting sub-plot to be visited throughout the series’ run, but the homelands and The Adversary must be present early.

5. Minimize The Farm. The Farm, home to most of the animal Fables, is certainly a vital part of the comics series, but for the transition to TV, the role it plays should probably be dialed back. Is there potential for some great stories with Goldilocks and The Three Bears? Absolutely. The reality though is that talking animals could become a little too strange, even for a show about Cinderella living in 2009. The Farm has had its moments during the run of the series, but with the focus being so much on the characters living in the heart of Fabletown, a trip to the country should be saved for when it’s only necessary. Plus, there may be too many unfamiliar characters in this part of the Fable universe for audiences to identify with and recognize right away. ABC probably doesn’t want to run the risk of pushing away viewers by making them depend on Wikipedia to figure out who that clever little fox was they just saw on screen (Reynard).

6. Keep the narrator. One of the quaint touches to the Fables series has been the narration that goes along with each issue. The titles of the stories are also a nice touch, such as in issue one when the title states, “Chapter One: Old Tales Revisited; in which we meet many of our principal players … myriad troubles to come.” These could be a unique part of the series. Should it go to the level of Mary Alice Young’s narration, YEARS after her death on the series Desperate Housewives? No. It should be a nice way to begin and end each episode, much like the stories that these characters started out as centuries ago. Even if they are found to be a distraction, they are easily removed from future episodes and broadcasts of the series. The mistake Fables could make as a TV show is to make them a needed part of the episode, something that Desperate Housewives has sometimes done to its detriment. The narration could be an excellent frame for each episode, grounding the series in the fact that it is, indeed, a great story we are listening to.

Even though the series premiere, supposing it gets picked up, is months away, ABC has to be aware of the fans’ needs and wants for this show in order for it to be successful. They need look no further back than when Birds of Prey debuted. That show had a promising premise, but so many changes and blendings of different stories and DC universes were made that it wasn’t quite recognizable when it aired. Add muddled writing to that list and the project was doomed. Here’s hoping the producers of Fables can avoid just being another tale themselves in the books of TV history.

What ABC Should Do For Fables: The TV Series