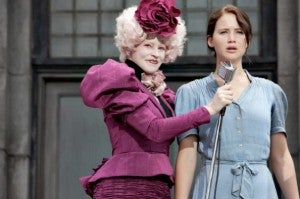 If you saw my review yesterday, you know that I think that Gary Ross did one heck of a job with the adaptation of the Suzanne Collins book "The Hunger Games."  The film is quite possibly the best adaptation I've seen of a book in two decades.  But there is something that the movie missed in the translation—and it's big. There are many themes in this story, but the one that could have been filled out much better is the idea of an oppressive government and how it has an effect on the citizens.  As readers of the book know, the Capitol has an overwhelmingly tight grip on the 12 Districts.  Those outlying Districts are incredibly poor—especially Katniss's District 12—and the Capitol works hard to ensure they stay that way.  Ross does an adequate job of showing how life is for Katniss and her family: hunting for food, bathing with buckets of water, continually putting Capitol peacekeepers in early scenes, etc. But the deeper sense of just how the Districts are being controlled doesn't get conveyed.  Katniss and Gale hunting outside of the fence is punishment of death should they get caught, but viewers don't understand that. The black market game trading that Katniss partakes takes all of one minute in the film.  We know that Gale has 42 entries into the Reaping, but we don't know WHY he has that many.  Nor do we know why Katniss tells Prim to not take food from the Capitol (that it will put her name into the drawing more times).  These are all more reasons for audiences to understand—and despise—the Capitol.  Because, after all, it isn't just President Snow that readers despise.  It's EVERYTHING about the Capitol: the excessive clothes, food, luxury items—all of which come at the expense of the citizens of the Districts.  It's oppression at its finest, and I'm not sure if audience members new to the story would completely grasp that.  Sure, the Capitol is bad, but we don't understand exactly why. Realizing that there are so many elements to Collins' book that could go into the film, it's understandable that certain things would get cut or slighted in translation.  But the oppressive element shouldn't have been one.  That being said, there are two more books to be adapted. And as the trilogy evolves, it's possible that the sequel films will show finer details of the Capitol's oppression. All in all, I still think it's one heck of a movie. It just slightly missed on one point.

What “The Hunger Games” Movie Didn’t Get Right