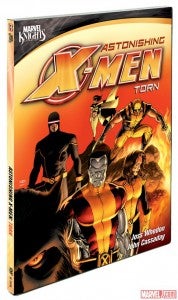 Marvel Knights Animation has announced the third installment of their direct-to-video adaptations of Joss Whedon and John Cassaday's run on Astonishing X-Men--titled Astonishing X-Men: Torn--will be released on August 14. The films are essentially feature-length motion comics, not entirely unlike the Buffy Season 8 video that was recently released in collaboration with Whedon and Dark Horse Comics.

Featuring a comic book-style cover by Cassaday, the DVD will run 81 minutes and see the X-Men dealing with a threat from within as Emma Frost's behavior becomes more unpredictable and dangerous, according to Marvel's website.

Check out the official synopsis below.

The chart-topping super-team of Joss Whedon ("Marvel's The Avengers") and John Cassaday (Captain America, Planetary) return for more action on home entertainment shelves this summer in "Astonishing X-Men: Torn"! Comic book pages from the third story arc of this acclaimed series by one of Marvel’s greatest collaborations between Whedon and Cassaday come alive when Shout! Factory, in association with Marvel Knights Animation, unleash the highly anticipated "Astonishing X-Men: Torn" on DVD August 14, 2012. This DVD invites viewers to delve deep inside the imaginative world of the Marvel Universe. A must-have for collectors and loyal fans, this deluxe DVD is featured with a graphic rich cover and a unique replica of comic book-style packaging that bridges the comic book to DVD concept. It is priced to own at $14.97.

Synopsis: This third installment brings more action and adventure as Emma Frost’s erratic behavior has the X-Men spinning in a nonstop downward spiral. Will an unlikely union be the final straw? After secretly lying in wait for months, the new Hellfire Club makes its move!