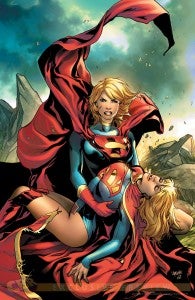 During the same interview where DC Comics Editor-in-Chief Bob Harras and Editorial Director Bobbie Chase revealed six upcoming cancellations of New 52 titles, including The Fury of Firestorm the Nuclear Man, the pair also revealed a number of creative changes coming down the pike in May. As previously reported, Deathstroke and Team 7 writer Justin Jordan will take on Superboy going forward, while Sword of Sorcery writer Christy Marx is headed over to Birds of Prey. Michael Alan Nelson will also move from a cancelled title (Ravagers) to a fairly safe one (for the moment anyway) in Supergirl. "Mike Johnson, with his nineteen issues, is a great guy and it was a great run," Harras told CBR of the outgoing Supergirl scribe. "And again, we fully expect to work with him on another project. This is not an absolute end; Mike opted to move on to something new at this point, and we hope to work with him again on something else." With series artist Mahmud Asrar heading to Ultimate Comics X-Men, May's #20 will signal a very different look and feel for the series. While Harras and Chase didn't say anything about who might be drawing the title, current Archer & Armstrong artist Emanuela Lupacchino is doing the cover for #20. ComicBook.com has reached out to Lupacchino to see if she's taking on the art duties. 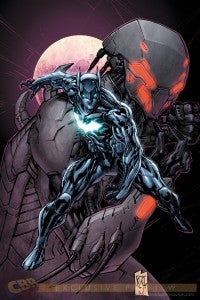 The cover (shown above) also sheds some light on what's likely to be the cover of April's "WTF-certified" cover to Supergirl #19. Looking at the second Supergirl there, read the solicitation and think really hard about it: "In a battle of equals, which girl will reign supreme?" Combined with the Stormwatch cover we've already seen and the Worlds' Finest teaser, it certainly seems as though the DC multiverse will be coming into play soon. As previously rumored, Keith Giffen will be leaving Legion of Super-Heroes, with Francis Portela returning to the title on art. Additionally, Fabian Nicieza will be leaving Batwing following April's big "Batwing quits!" issue, and the title will see a radical directional shift under new writers Jimmy Palmiotti and Justin Gray. A newly-redesigned Batwing is part of the title, which you can see at right.