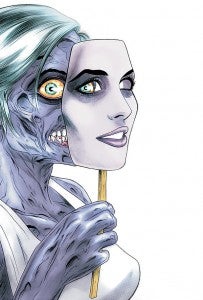 "Aside from the Fairest arc I already committed to doing, iZombie will be the last time I'll ever write for DC," tweeted prolific writer Chris Roberson today, as part of an extended conversation he's having with fans on Twitter about the ethics of Marvel and DC, Before Watchmen, The Avengers movie and his decision to no longer work for the publisher who brought him into comics (with Cinderella: From Fabletown With Love).

Roberson reportedly turned in the script for his final issue of iZombie today, the creator-owned book he does with Mike Allred at Vertigo which as recently canceled, and chose to mark the occasion with an afternoon drink and a lot of tweeting about the way things are done in the comics industry. Pressed by fans, he admitted that the decision to leave had been made long ago, but that he had waited until the cancellation of iZombie was announced to say anything about it.

He also described his departure as "Less in their treatment of me than in their treatment of others and how they conduct their business in general," and encouraged fans wondering about the thought process behind it to read a Comics Alliance post by David Brothers which took DC to task for Before Watchmen as well as sharply criticizing Marvel for its treatment of Jack Kirby, the co-creator of almost every character featured in the upcoming Avengers movie. Brothers says, in part, "I'm too conscious of the wrongdoings of both companies to be able to support them and not feel complicit and terrible in their exploitative and unjust practices." Earlier this week, Brothers took Newsarama and other comics news outlets to task for not properly framing the debate about Before Watchmen.

And another creator on Roberson's Facebook page took Brothers' impression--that as a fan he can't support these projects--to the next level.

"If DC knew it couldn't get any good talent if it acts this way, it would change," said cartoonist John Linton Roberson (no relation) on the Facebook page. "That's what caused the changes in the 80s that LED to Watchmen--that most of their big talent was going to Pacific, First and Eclipse. If the big 2 hadn't been scared, royalties and rights of any kind never would have happened."

He's right, of course, at least to an extent. And it was the lack of fulfillment found in the promises of the Watchmen deal and others like it that drove many creators to small publishers (or even to found Image Comics) in the early '90s. Would anyone be surprised if the anger over Before Watchmen facilitated a similar exodus? Even among those who weren't actively against it before, inflammatory comments made by J.M. Straczynski at the Chicago Comics and Entertainment Expo this past weekend have galvainized opposition even more than ever. “Did Alan Moore get a crummy contract?" He's quoted by Chicago's Comic Vault as asking the audience. "Yes. So has everyone at this table. Worse was Siegel and Shuster, worse was a lot of people.”

Roberson talked to us back in February for the Panel Discussions podcast, mostly about the same issues.

“When I was an angry young firebrand in my twenties, I was completely opposed to work-for-hire and I felt that creator-owned was the only way to go," Roberson told ComicBook.com. "As I appproached the end of my thirties and entered my forties, I was given the opportunity to work on a few work-for-hire projects using franchises that had mattered a lot to me as a kid. I just couldn’t turn them down because I got a chance to work on these things that I’d loved for so long–but if anything, that just validated what I’d thought years before.”

Will Before Watchmen Drive Creators Away?