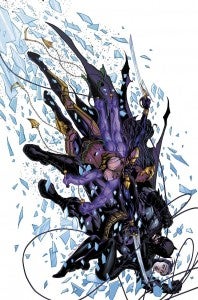 Batman's partners have a nasty habit of ending up dead--although not all of them stay that way. Still, that doesn't seem to phase new character Harper Row, who will offer her help to Batman in June's Detective Comics #21. Shipping with three different covers, the story claims to be delivering on some of the dangling plot threads left behind by Detective Comics #0, which dealt with Bruce's "final lesson" in the Himalayas prior to returning to Gotham to become Batman. Whether this means to suggest that Detective Comics #21 will be playing with Bruce's distant past directly--something Scott Snyder and Greg Capullo are doing in Batman starting that month--is unclear at this time. The other bit, though, and what's got us thinking, is that Harper Row offers Batman an assist--"but will The Dark Knight be willing to accept her help?" Given that he's worked pretty well with others when it's suited his needs in the past, this feels like some leftover angst from Death of the Family and the death of Damian (Robin) Wayne last month. We've speculated in the past that Row is the most likely candidate to replace Damian, something that fans have expressed wouldn't make a lot of sense for basically one reason--it's too soon after the loss of Damian, and Batman would be hesitant to bring on another partner. So with Bats expressing reservations about accepting this potential Robin's help and nearly a year coming up wherein Scott Snyder (Row's creator and, presumably, champion with editorial) will be dealing mostly in the past, what if the way she's asserting herself into his life in Detective Comics is to eventually set herself up as a new Robin once Batman: Zero Year wraps up in 2014? There's also three covers--which begs the question with some readers, will one variant be something really crazy like Row in a Robin costume? The answer to that one, almost certainly, is no--about half of the Batman titles are shipping with between two and four covers. The more likely scenario is that there's the standard cover, a sketch variant and the digital combo pack variant. DETECTIVE COMICS #21 Written by JOHN LAYMAN Art by SCOT EATON Backup story art by ANDY CLARKE Cover by JASON FABOK 1:25 B&W Variant cover by JASON FABOK On sale JUNE 5 • 40 pg, FC, $3.99 US • RATED T Combo pack edition: $4.99 US Retailers: This issue will ship with three covers. Harper Row joins Batman on a case that leads all the way back to DETECTIVE COMICS #0, but will The Dark Knight be willing to accept her help? Illustrated by guest-artist Scot Eaton!