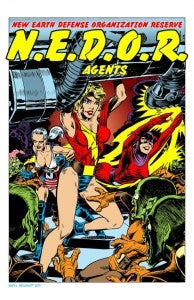 Back in the eighties, Will Meugniot was known for producing amazing artwork for the DNAgents and Vanity comic series. Since that time, Meugniot has launched a successful career outside of the comics field as a director and producer of several animated projects. Now, Meugniot is returning to the comics field with a new series called N.E.D.O.R. Agents.

As part of celebrating the new series, Meugniot has teamed up with PREVIEWSworld for an orginal art giveaway. In the contest, three pieces of Meugniot’s art are up for grabs, one for cosplayers, one for retailers, and one for fans. The full contest rules and directions can be found on PREVIEWSworld’s Facebook page.

“I’m very excited about PREVIEWSworld hosting this contest for my comic”, says Meugniot. “It’s been over 20 years since my last long form stories in DNAgents and Vanity, and it’s thrilling to see the interest N.E.D.O.R. Agents is garnering. Vince Brusio at Previews World, Bill Black and Mark Heike at AC and I are trying to give something back to the people who support independent comics in the form of a fun give away.”