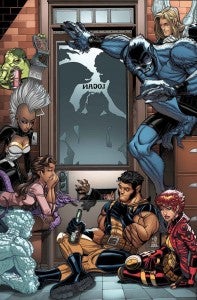 It's the circle of life at Marvel Comics: one Wolverine title folds and another launches.

Following yesterday's announcement that Paul Cornell and Ryan Stegman would relaunch Wolverine again in February, Marvel's solicitations revealed that Wolverine & the X-Men, Jason Aaron's fan-favorite series set at the Jean Grey School, will graduate its students and close up shop that same month.

Nick Bradshaw, as recently revealed, will leave the X-family for the time being and head on over to Guardians of the Galaxy, drawing May's Free Comic Book Day issue.

What's next for these characters? Well, that whole "Circle of Life" thing generally works with X-Men titles, too...!

WOLVERINE AND THE X-MEN #41 & 42 JASON AARON (W) • NICK BRADSHAW & PEPE LARRAZ (A) Cpver by NICK BRADSHAW SCHOOL’S OUT FOREVER! FINAL ISSUES! • It’s the end of the year for the Jean Grey school – but where do our graduates go from here? And who will have survived the experience?! • Jason Aaron, Pepe Larraz & Nick Bradshaw bring the story of the Jean Grey school to a close! 32 PGS. (EACH)/Rated T …$3.99 (EACH)

Wolverine & The X-Men Ends In February