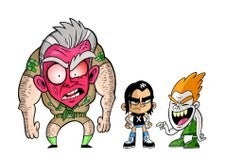 WWE Studios and The Simpsons' animation studio Film Roman announced today that they have entered into a co-financing and co-production agreement to produce up to thirteen, three-minute webisodes of a new animated series entitled Camp WWE.

Mike Benson of Entourage and The Bernie Mac Show will script the series.

"Film Roman has been involved with some of the most well-known and humorous animated series,” said Michael Luisi, President WWE Studios.  “They are the perfect partners for WWE Studios to capture our Superstars in a truly unique and fun way."

"CAMP WWE is a new and exciting project with a great creative team for Film Roman to be working on with WWE Studios and we are very bullish on its prospects for success.  With a combination of their unique personalities, distinctive characteristics and huge built-in loyal fan base, WWE Superstars make for ideal animation subjects in CAMP WWE," said Dana Booton, General Manager for Film Roman.  "We are very pleased to be working with WWE Studios and hope that it will begin a mutually beneficial, long-term business relationship."

Here's the official pitch, per a press release from the producers:

From WWE Studios and Rilm Roman, the animation studio behind The Simpsons and King of the Hill, comes an irreverent new, adult comedy series about what the biggest, most outrageous WWE Superstars® were like as kids. Camp WWE follows these unruly tykes as they body slam their way through their formative years. Proving to be a nightmare for teachers and other kids, their exhausted parents pack-up their future WWE Superstars with their masks, chains, kneepads and security blankets and send them off to Camp WWE, to be transformed into model citizens by the most terrifying counselor who ever lived, Mr. McMahon.

WWE Teams With The Simpsons Animators For Webseries