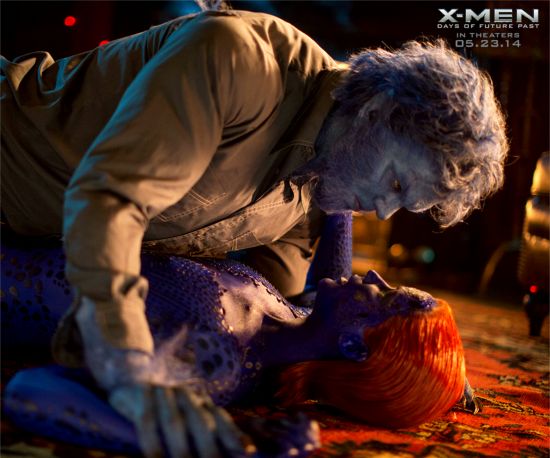 Twentieth Century Fox held the first press screening for X-Men: Days of Future Past earlier today, and the early twitter reviews are overwhelmingly positive. In fact, based on some of the gushing praise, X-Men: Days of Future Past might be the best X-Men movie ever. And even though Quicksilver’s costume has drawn criticism from fans, early indications are that the character is great in the movie.

FOX 5 Entertainment/Film Critic Kevin McCarthy tweeted, “Geeking out! Saw #XmenDaysOfFuturePast - Mind = officially blown! - Insane emotion/action! Every performance is awesome! Fav #XMen flick!!! There is one scene in #XmenDaysOfFuturePast that I would pay a full ticket price to see on a loop for 2 hours! Epic amounts of #NerdTears!”

Mike Avila tweeted, “X-Men: Days of Future Past is superb. Carry on.”

Brian Crall tweeted, “X-MEN: DAYS OF FUTURE PAST WILL BLOW YOUR MIND!!! #XMen”

Fandango columnist Sean O’Connell tweeted, “Wow! DAYS OF FUTURE PAST is the greatest, most complete and staggeringly entertaining #xmen movie to date. Incredible. Movie of the summer! McAvoy, Jackman and Fassbender blew me away in #xmen. McAvoy is doing amazing things with Prof. X. Best use of Wolvie in years!! Can't believe how much I enjoyed #xmen. Such an incredible Marvel movie. Fans are going to lose their minds!! Cap 2, Spidey 2, and a killer #xmen movie in theaters all at the same time? Glorious time to be a comic-book movie fan. Enjoy it, fans! Do you know what character is legit great in #xmen? Quicksilver. I'm not joking. He REALLY works! Great scene. There are so many amazing scenes in #XmenDaysOfFuturePast and I can not WAIT to watch it with a theater filled with #xmen fans!”

Inside Entertainment TV Host Paul Salfen tweeted, “Wow! #DaysofFuturePast was so good! Definitely the best X-Men movie so far. And that's all you need to know...go see it! #XMen @XMenMovies.”

WSVN Entertainment Reporter Shireen Sandoval tweeted, “LOVED #XmenDaysOfFuturePast and love me some mutants (for the record).”

Inner Space Host Ajay Fry tweeted, “1st I heard 'Don't tweet' then later 'Tweet only reactions, no spoilers' so I'll say this: It's basically the #XMen film I've always wanted. Aside from Peter Dinklage as Trask, there's very few new cast members. For all the huffs about QS's costume, he was great.”

X-Men: Days Of Future Past First Reviews Are Overwhelmingly Positive