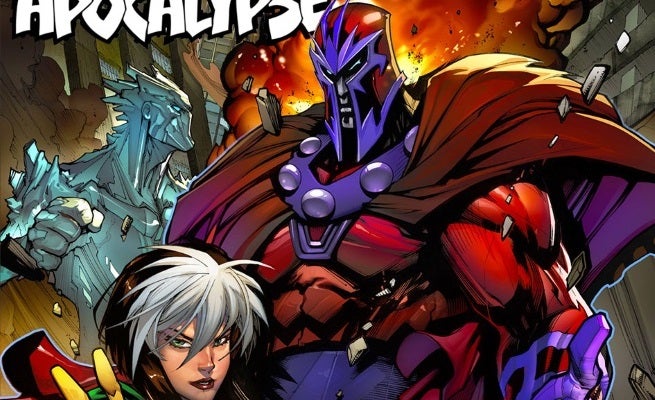 The X-Men will return to one of their most famous storylines, Age of Apocalypse, for a new Secret Wars series.

Written by Fabian Nicieza and drawn by Gerardo Sandoval, the series returns to the timeline where Professor Xavier was killed before he could form the X-Men. Magneto formed the team in his best friend's stead, but not in time to stop Apocalypse's rise to power.

However, this is a new version of the Age of Apocalypse, and not the same one seen in comics before. The original Age of Apocalypse timeline was revisited for a sequel series and again during Rick Remender's run on Uncanny X-Force and the spinoff Age of Apocalypse ongoing series that followed. IN the end, there weren't very many characters left alive.

But just because the new series isn't continuing where the old one left off doesn't mean these post-apocalyptic mutants are getting off easy. Quite the contrary according to Nicieza.

"So anyway, the Secret Wars Age of Apocalypse is, in nearly all ways, an even WORSE world than the original – if you happen to be human or an X-Man!" he tells IGN. "Both humans and the X-Men are in a far more compromised, desperate state of existence and time is running out for both of them."

The series' plot will follow the X-Men's search for a Cypher, a key player in the team's bid for survival, and perhaps even more.

"Cypher not only interprets language, he can also discern meaning and intent behind what is said," Nicieza explains. "In their desperate attempt to save themselves and possibly prevent a greater war across Battleworld, Magneto's X-Men need Cypher to expose the true plans of both the desperate human faction led by Peter Borbeau and Carol Danvers and Apocalypse."

Age of Apocalypse begins in July. Check out the solicitations for issues #1 and #2 below, and get a preview of Sandoval's art in the gallery at the bottom of the page.

Written By FABIAN NICIEZA | Art and Cover by GERARDO SANDOVAL

His war has been won. The few humans left alive are enslaved, the mutant rebellion crushed. EN SABAH NUR, the APOCALYPSE, rules his BATTLEWORLD kingdom without mercy, but the terrorist X-MEN plan to end his reign. Success means finding one very special mutant named CYPHER and unleashing a weapon that will kill Apocalypse -- and possibly all mutants, too!

Written By FABIAN NICIEZA | Art and Cover by GERARDO SANDOVAL

X-Men Return To Age Of Apocalypse For Secret Wars

EA Has Talked With Disney, Apple, and More About Being Acquired or Merging