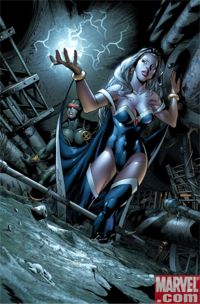 Storm, whose real name is Ororo Monroe, has been known by many titles. She is the Queen of Wakanda, the “Mistress of the Elements,” and a former leader of the X-Men. Writer Christopher Yost will tell a Storm story that many have been waiting for in X-Men: Worlds Apart. In the series, there is a puzzling murder committed by a mutant in the heart of Wakanda. Storm investigates the case, and what she uncovers may force her to make an important decision. Will Storm remain Queen of Wakanda or will she instead return to the X-men? Writer Christopher Yost said, "She has the aloofness of a goddess, but once you get inside her head, there's so much more…As a goddess, she was worshipped, as an X-Man she was hated and feared, and as Queen of Wakanda, she's respected and loved…The story is about Storm deciding who she is.” The four issue limited series is scheduled to hit comic stores this Fall. X-Men: Worlds Apart #1 is written by Christopher Yost with pencils by Diogenes Neves and a cover by J. Scott Cambell. The first issue has an on-sale date of October 15, 2008.