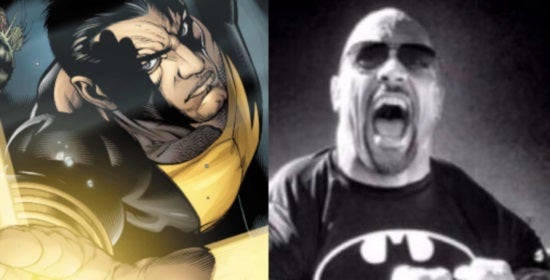 We had previously reported that Dwayne "The Rock" Johnson had been in talks to play a role in a superhero movie, though which role was up in the air. The Rock mentioned being up for Lobo, but that project had been shelved. He mentioned that he was even more interested in playing a role in a Shazam film, but that had also fallen through the cracks…or has it? Buried in the Wall Street Journal article that announced the Justice League movie that will follow Batman vs. Superman was an interesting bit of information about Warner Bros. other DC Comics and Vertigo related films:

Warner Bros. has several other movies in development unconnected to the Justice League that are based on DC superheroes and fantasy and crime titles from its Vertigo line of genre comics, said Mr. Silverman and Toby Emmerich, president of Warner's New Line Cinema label. They include "Shazam," "Metal Men," "100 Bullets," and "Fables."

So, with Shazam being mentioned by Silverman and Emmerich, does that mean that the project is back on? If it is back in production, is this the Rock's future superhero role? If so, will The Rock play Shazam or, as fans have long suspected, his nemesis Black Adam? It's also interesting that the studio seems to have chosen to separate Shazam from Justice League. Perhaps they want to present the character in a more fantasy-filled, lighter-toned style than the gritty science fiction tone of the DC Universe established in Man of Steel. Either way, it's interesting that a Shazam film would be mentioned considering it was previously believed to be cancelled. We know the Rock is interested, so maybe things will finally come together.