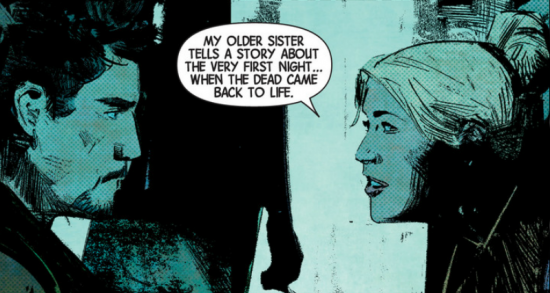 Cinema legend George A. Romero has been evolving the world he built with Night of the Living Dead ever since he finished shooting the thing.

His new comic book series with Marvel, Empire of the Dead, does a little bit of both, surprisingly. 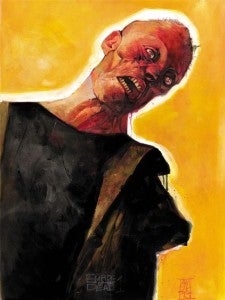 When Diary of the Dead came out in 2008, the film was essentially sold as a soft reboot of the franchise. Done in a mockumentary style, the film traced the earliest days of the zombie apocalypse, using modern technology and styles. That was in contrast to the previous four films, which had taken place over the course of a long period of time and never particularly contradicted one another.

The comic seems to take the timeline of Diary and Survival but with the added wrinkle that Night of the Living Dead absolutely did happen...although, probably, a lot more recently than the films would have us remember.

That's because the female lead in Empire of the Dead is actually the sister of Barbara and Johnny, the young siblings whose visit to the cemetery turned into a nightmare at the start of Night of the Living Dead.

She relates the experience of that film in the comic, taking clear advantage of the fact that Marvel didn't have to pay a dime for it.

Well, there have been plenty of Night of the Living Dead comics in recent years, mostly by Avatar, and even including a one-shot set in New York. That's easy enough to understand, since a mistake by distributors back in the Sixties means that Night of the Living Dead, an iconic film with an instantly-recognizable title, fell into the public domain immediately upon release and has been there ever since. The title is not trademarkable, and in fact Robert Kirkman has said that he almost titled The Walking Dead as Night of the Living Dead in the hope of getting wider awareness at the start of the series.

This is the first time Romero has become closely involved with one of the comics, although he did contribute an unused script to become the DC series Toe Tags about ten years ago. That script would have been one of the ...of the Dead films had it been made, and so it's as close to a comic book sequel as Romero ever got until now (his collaborator on the original script, John Russo, was involved with the Avatar series).

In any event, there are clear implications here that Empire of the Dead exists in the same world as Land of the Dead, as well. The carnival atmosphere, with "stinkers" trained to fight one another in gladiatorial combat for the entertainment of the masses, is retained here, right up to the zombies chained to carnival-type booths that can jump out and startle—but not actually harm—our heroes. The only thing about that is the fact that it kind of takes the aforementioned concept of our decaying society as its own character and turns it on its head. Suddenly, that decay has happened rapidly, in a 28 Days Later/The Walking Dead-style timeframe instead of over the decades of cultivated mayhem that led from 1968's Night to 2005's Land.

With the creation of this Jones family connection, Romero is for the first time making a very different kind of sequel. Humanity in his films has, largely, been little more than a prop. The main character, really, is society; we watch it struggle and ultimately crumble under the pressure of the undead's onslaught and the frailty, greed and hubris of mankind itself. The culture is the only character that has continued to develop for years in Romero's movies, and it's on a downward arc.

Maybe that's why he's given us a heroine to root for here; she's taken the traumatic experiences that her sister shared with her after Night of the Living Dead and made a life's work out of trying to rehabilitate zombies to some extent. She's a character who is immensely easy to root for, and who you'd like to see unambiguously survive (as opposed to most of Romero's protagonists, who simply wander off into the uncertain world at the end). 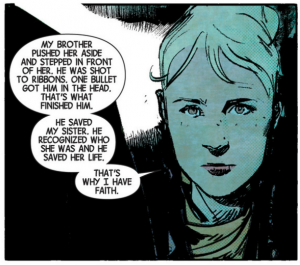 Penny Jones, then, gives the readers a chance to invest in a character rather than a situation, which is a transformation of the entire worldview of Romero's franchise somewhat.

Of course, the scenario that Penny puts forth in the comic is not actually how things played out onscreen in the original film. The 1968 movie has Johnny, as a zombie, return later and drag Barbara out of the safety of the farm house, where she is devoured by the undead outside.

Here, we learn that in fact he dragged her clear of the other zombies, apparently ready to devour her by himself in a nearby barn, but hesitated—she assumed because some animal part of his brain could recognize her—and that hesitation was long enough to save her life when local vigilantes and the sheriff stumbled upon the tableau in progress and killed Zombie Johnny.

So...is this set in the same world as the films? An alternate future where this version of Night of the Living Dead happened rather than the original version? Something else entirely? It seems that Romero, who has "evolved" the walking dead as much as he has the world around them in more recent installments, is now retroactively writing some level of consciousness and motivation into even the most primitive of his own undead ghouls.

What Romero has done here, then, is to reinvent the world of his signature series completely, tying everything together while simultaneously tearing elements of it down and using what works best to tell the story he's feeling right this minute.

Hey, what better place to do that than in comics?