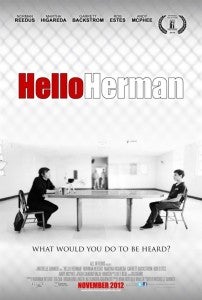 While The Walking Dead might not be returning until the fall, Norman Reedus is appearing in a new movie, which is opening in fifteen major cities today. While we tend to primarily review comic book, science fiction, and horror movies on Comicbook.com, we were invited to view an early screening of Hello Herman and didn't want to pass up on the opportunity of seeing Norman Reedus in a feature film. Hello Herman is the type of movie that Hollywood rarely makes, but should make more often. Hello Herman deals with some very serious issues, many that most people would probably rather not think about. However, the issues that Hello Herman addresses need to be dealt with, so that perhaps through gaining some measure of understanding future tragedies might be prevented. At the heart of Hello Herman is a story about bullying, and the damaging effect it can have on children. Herman is a kid who is relentlessly bullied, and he lashes out through a killing spree at his school. Garrett Backstorm does an incredible job playing the very difficult role of Herman. He walks the narrow line of helping the audience understand what drove Herman to become a mass murder, but he never crosses the line of trying to make Herman into a sympathetic character. Herman committed a horrible act, and the movie deals head on with the repercussions of his actions, not only the impact it has on him but how it affects his poor mother as well. At times, Herman seems to think that people will remember him because of his crime, but as Norman Reedus' characters Lax Morales points out the type of notoriety he has achieved will be fleeting. As complex and complicated as Garrett Backstorm's role was, Norman Reedus' role was equally as challenging. When someone plays an extremely popular character like Daryl Dixon on The Walking Dead, it's sometimes difficult for viewers to not think of the character anytime they see the actor. However, Norman Reeedus shows his range and capabilities as an actor by engulfing himself in the role of Lax Morales, and convincingly so. In playing Lax Morales, Norman Reedus plays a character who is also struggling to deal with his own past and demons. While we don't want to give away what is one of the most shocking and surprising moments of the film, we can say there is a very specific reason why Herman chose Lax Morales as the person that he wanted to deliver his message. One of Norman Reedus' most powerful scenes actually occurs with director Michelle Danner, who plays Herman's mother. The scene captures the despair and the confusion that family members face in situations such as the one that occurred with Herman. One of the big reasons that Hello Herman works is because of the cast. Garrett Backstorm and Norman Reedus are both at the core of the movie, and if either of them didn't carry their weight, the movie would have failed. Fortunately, they are both brilliant in their roles. Hello Herman is a film that succeeds at the difficult task of delivering multiple messages. The film should make those that engage in bullying think long and hard about their actions, and it also makes it clear that lashing out through violence is not the answer. Hello Herman is a powerful film, which gives viewers a lot to think about and discuss. Here's a listing of cinemas where Hello Herman is playing on Friday, June 7. Cinema Village / NYC Laemmle Noho / LA Atlanta - Plaza Theatre Miami - Palace 18 Tempe/Phoenix - Harkins Valley Art Tempe Cleveland - Great Lakes, Mentor, OH Modesto/Sacramento - Brenden 18 El Paso - Premiere 18 St. Louis - Jamestown 14 Lake Park, Florida - Mos' Art Philadelphia - Montgomeryville Stadium 12 Albuquerque - The Guild Boonton, New Jersey - Darress Theatre Lake Worth, Florida -The Stonzek Theater Shreveport, Louisiana - The Robinson