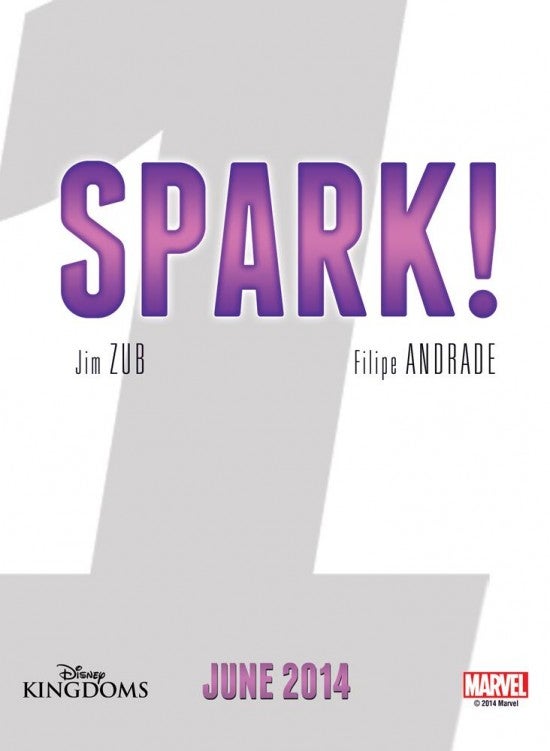 Yesterday, Inside the Magic -- a website dedicated to the Walt Disney Parks -- had the exclusive reveal that Jim Zub and Filipe Andrade would be launching a new, Disney Kingdoms-branded comic book. In true Marvel Comics fashion, the teaser was just one word: "Spark." The choice of word and white-and-purple color scheme, though, left little to the imagination and as Inside the Magic teased that fans should be able to guess easily enough, their comments thread filled up with one word: Figment. That's the name of the purple dragon who serves as the mascot of the Imagination! pavilion at the Epcot theme park at Walt Disney World Resort. 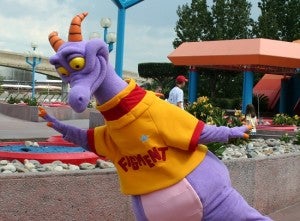 Figment is featured heavily in the "Journey Into Imagination" Dark Ride, in which he was originally introduced by Dreamfinder's song, "One Little Spark." He's appeared in a number of short films, including starring alongside imagination-themed Disney characters like Peter Pan and Alice in Wonderland. Disney nearly retired the character of Figment in 1999 when the attraction was reworked, but fan (and stockholder, since Figment is a lucrative character for merchandising) outcry resulted in the character being reinserted into the new version, essentially making a Version 1 which featured the dragon, Version 2 which did not and then a Version 2.5, which was version 2 but with Figment inserted back in. No further details are yet available on the comic (which isn't technically Figment- or Journey Into Imagination-centric just yet), but given Marvel's turnaround time on these teasers recently, it's reasonable to expect something firm in the next week or so -- probably today. Since the teaser was given to a Disney Parks-themed website, that one or another like it will probably carry the full announcement when it comes.

Naruto Teases the Comeback of One Iconic Location

Marvel's Eternals Spoilers Have Fans and Disney Pleading for Discretion

The Witcher 3: Wild Hunt on PS5 and Xbox Series X May Be Releasing Very Soon