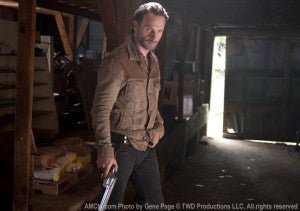 What's our official logline? In an effort to prevent any more deaths, Rick and the Governor meet to come up with a peace treaty. Alright, so here goes... The episode opens  with an overhead shot looking down at Rick's group, as he and Daryl leave vehicles and head through a group of silos. Hershel is left behind to watch the cars with a rifle. Daryl and Rick make their way through the industrial-looking area while Hershel checks his leg, where he's duct-taped a pair of backup handguns. Entering a building as quietly as he can, Rick motions Daryl around to the other side. It's dark inside and he hears a noise, cocks his gun. There's an empty table with a chair near it, and after another rattling noise, the Governor emerges from around a corner. He holds his hands up and grins, then puts them down when Rick is not amused. 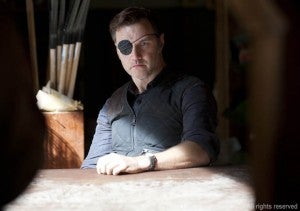 "We have a lot to talk about," he tells Rick. Rick tells the Governor that as far as he can see, things are pretty clear: the Governor attacked them. The Governor counters that he could have killed them all, and did not. He says he wants to remove his weapon as a show of good faith negotiation, and that he'd like Rick to do the same. Rick keeps his gun trained on the Governor, but allows him to reach for and remove his gun belt. The Governor hangs it on a post behind him and once again resumes the grinning, hands-up posture. Rick holsters his gun but does not remove the belt. The Governor sits at the table, where he's duct-taped a gun. Outside, Daryl reports what's happening back to Hershel, saying that even though they aren't seeing anything, it doesn't feel right, and to keep the car running. As he's saying this, a group of the Governor's men pull up in the SUV from the attack, including Andrea. She's surprised to hear that the Governor is already inside and lets herself in, demanding to know what's going on. 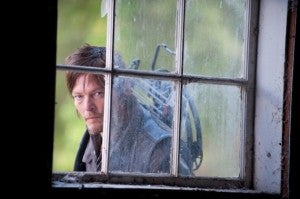 She comes in and starts preaching at Rick and the Governor about how she asked them to come here because people have died for no reason. Rick tells the Governor that he knows about the raids, and the heads, and the Governor counters that he knows about Rick, too, and doesn't care about any of it. He continues his gladhanding, smiling demeanor, which clearly sets Rick even more on edge. Outside, Hershel suggests that he should go in, but Martinez and Milton object, saying that the Governor wanted to be alone with Rick. When Daryl asks Milton what exactly he does for the Governor, it almost immediately escalates things between Daryl and Martinez, with Hershel breaking it up. Back at the prison, Merle looks on as Glenn organizes the rest of the group into a defensive posture, hiding ammunition around the prison and fortifying around the premises. Merle tells them that what they need to do is to go join Rick and the Governor, and kill the Governor right now, when they know where he is. Michonne objects, and Glenn says that it's not the right move because too many things could go wrong and Rick, Hershel and Daryl could all end up captured or killed. 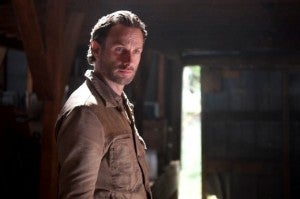 Back in their negotiation, Andrea starts talking to Rick and the Governor, but the Governor dismisses her. Rick hands the Governor a map, and offers him a compromise where each of the two groups stay on their side of the river. The Governor mocks him, tells him that Andrea was in no position to offer anything, and that he's there only to accept Rick's surrender. As the conversation starts to escalate, the Governor asks Andrea to leave the two of them alone. She resists, but Rick agrees, saying that he came to talk to the Governor. She leaves, joining the group outside, but not speaking to any of them. Inside, Rick sits at the chair across the table from the Governor and Martinez closes the door. Challenging the Governor as to whether he had responsibility to his people, Rick asks what exactly he was doing leaving so much responsibility in the hands of Merle. The Governor says that Merle is erratic but effective. "I thought you take responsibility," Rick says, to which the Governor replies, "I thought you were a cop, not a lawyer." After a bit more back-and-forth, the Governor reveals that Andrea told him about Judith's murky parentage; he accuses Rick of misjudging Shane, of failing to see "the devil beside you." Rick tells the Governor that he sees him just fine, and the Governor, after a long pause, wanders off to get whiskey. Outside, Milton says that he wants to discuss the issues while they're waiting outside. He tells Daryl that he recorded the details of the Governor's attack on the prison, and called it a battle that will be a part of human history after the plague is over. Hershel says that makes sense, but before they can start talking, a walker is heard in the distance. 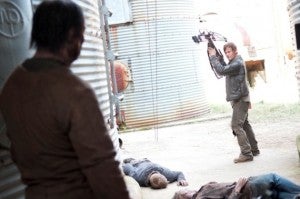 The Walking Dead Recap: Arrow on the Doorpost

E3 2023 Is Being Coordinated by the Group Behind PAX