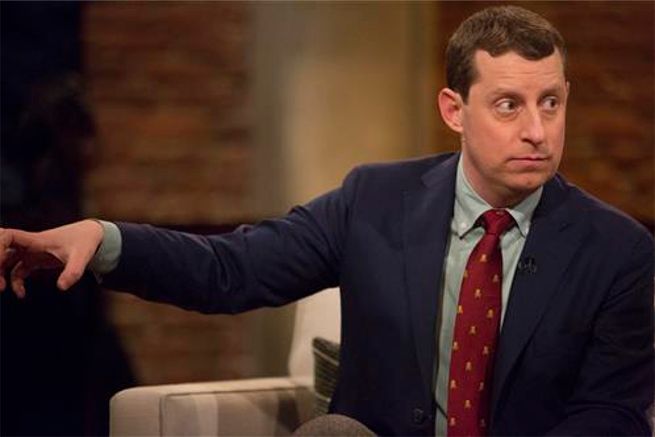 During The Walking Dead's Comic Con roundtables, showrunner Scott Gimple talked a bit about trying to keep the audience in suspense and about following the comic book source material for inspiration in the show's upcoming fifth season.

He also talked about killing characters, giving notice to the cast and the unique challenges of running a show where "no one is safe."

ComicBook.com was there. Here's what he had to say...

Can you give a sense of how many episodes we're seeing in the season five trailer?

Scott Gimple: No. I always wonder what -- especially, I've been through that trailer a million times and I've already been freaked out once about something I might have missed, forest for the trees. I don't want to spill becuase I think people will be able to have their checklist. But I'll say a bunch.

I was pleasantly surprised to see that Judith was reunited with Rick...

Gimple: That could have been Judith. I couldn't identify that baby in a lineup.

As you ended the last season and started putting together this one, how do you decide to put the show's spin on the comics?

So when I started working on the show, it was just finding those moments that I thought were amazing and because we had the ability to plan things out because we had this incredible roadmap, what could we do to turn up those moments even more? To make them even more intense? To really get the feeling that Robert gave me when I read that, and see if we can do that for the audience times ten. It's always been like that since I started as a writer on the show, before I was running the show. We're very lucky to have this roadmap and it's just looking down there and putting the puzzle pieces together.

It's also what are other stories that we can tell that are completely different that still serve the comic and serve the inspiration and circle back at different points? There's Daryl there; there's characters that are dead that are alive in the book and that's a bit of a butterfly effect and things will change.

It's super fun. It's not just sort of doing transcription; it's even working hard and coming up with brand new ideas to get to places in the comic book that are virtually verbatim to the comic book.

Are the actors warned about their deaths?

Gimple: It's an incredibly difficult thing and the circumstances do dictate things but it is good to try and give some notice -- actually a lot of notice -- but it's not like a whole season's notice because it is an evolving story.

Althouth we do have some pretty hardcore plans, things change and also timelines shift and suddenly, "Oh my God, I thought that was four episodes away and it was three" or "I thought that was two episodes and it's six." But it's a very very difficult thing. It's an unpleasant thing on the show but I also love that all of us have pressure to treat it with reverence and to take it very very seriously and we have to tell stories that are good enough to merit losing people that we like working with a great deal and characters that we kind of fall in love with. It's definitely the weirdest job I've ever had because there's some seriously unpleasant parts to it that I never thought about.

I will say what's wonderful though about this cast is we still see each other a lot, even the people who died. We got to see Jon Bernthal for a hot second and that was amazing. It is weird sometimes. I have dinner with Scott [Wilson] on occasion and sometimes as we're eating I wonder, "Is he thinking that I killed him?" As we're eating? It still weighs on me.

Do you have a set process?

It is, just try to be as respectful as possible, give as much heads-up and I will say it's definitely not a perfect process and yeah, it really really sucks. It sucks all around but I guess that's the power of the show because it hits all of us. It's part of the package but I think it's one of the things that makes us take it very very seriously.