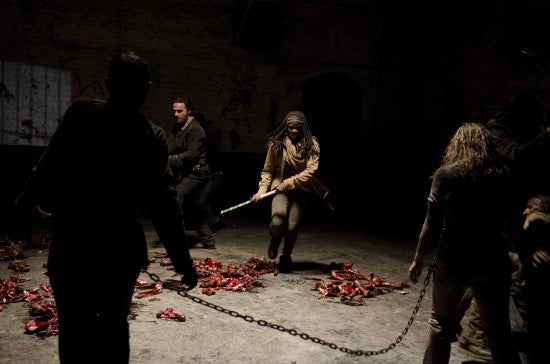 A new photograph has been released by AMC, seemingly giving a look at a deleted scene from last night's Season Four finale of AMC's The Walking Dead, titled "A." In the photo, seen above, Rick, Michonne, Carl and Daryl find themselves in what we assume is a room somewhere on the grounds of Terminus, in a room ringed by chained-up walkers and what looks to be fairly fresh human remains strewn along the floor. In the finale, just before they enter The Church where the Terminians have a kind of altar set up to honor their fallen, they leave the courtyard and enter directly into a very dark room. The episode then cuts to them entering The Church and continues from there. 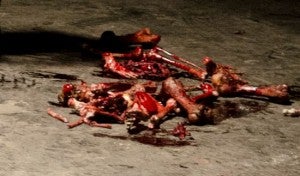 It seems that this moment might be where the deleted scene came from, on the strength of not just the lighting (the room they entered looked much darker than The Church) but because you can (barely) see Daryl and Carl in the shadows on the far right and left of the image and Terminus is the only time the entire group was in one place, inside a building, not just this episode but since the fall of the Prison. Within the journey through Terminus, too, there's really only the one room (The Church) that's even a little bit dark. After they exit The Church, it's light on the other side of the door. In any event, the key takeaway here may be the body parts on the floor. There are no skulls that we can see; it appears to be pre-cut pieces of meat, not the bodies of people who similarly stumbled into the room and were overtaken. In fact, that the walkers are chained suggests that they probably aren't meant to actually kill anyone, just to be part of the trap laid to lead Rick and the others to their eventual fate in the boxcar. Feeding them may just be to keep them strong and prevent them from becoming emaciated like many of the "starved" walkers Rick and company have seen on the road this season and last. Of course, there's another possible explanation for it, too. 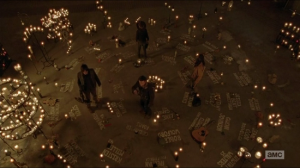 "And this right here is Church. It's kind of a memorial to our departed Terminants," said Andrew J. West, who plays Gareth. The names on the floor, then, are presumed to be the loved ones of the residents of Terminus, which presumably explains why there are trinkets left behind for them while the residents of the community are fairly shameless about pillaging from the living, taking things like Glenn's pocketwatch and Eugene's riot gear. While some fans had speculated that this was in fact a room where the Terminians memorialized their victims, the notion that it's in memory of their loved ones lost would support the messages on the wall, which say things like "never trust" and "we first, always." It seems very possible that they encountered somebody like The Governor and took away very different lessons from the one Rick's group did. "There's a big story to Terminus," series creator Robert Kirkman explained in the show's postmortem at TheWalkingDead.com. "There's a very long and involved way that Terminus came about, and that memorial is a big part of it. It's what these people have lived through and what's happened to them and what's built them into what they are, which will be revealed in Season 5. There are a lot of hints when you watch this episode closely of what's to come in Season 5, so I would definitely urge everyone to watch this episode multiple times and try to pick out the things we're teasing because there's a lot to find." So -- what if the well-fed walkers were in fact members of the Terminus community who have turned, and are continuing to serve the community by being part of the trap/maze while being nourished by their still-living loved ones, not entirely unlike The Governor and Penny (or, for that matter, Hershel and the people in his barn)? It's a leap, certainly, but not an entirely unreasonable one. That could be an interesting element to explore, given the widely-held belief that the Terminians are cannibals. In spite of strong evidence that they are last night, is it possible that they themselves are not cannibals, but rather providing for their "loved" ones? Or at a minimum, that they turned to cannibalism only after realizing that their dead loved ones were eating better than they were and that it was better to eat the strangers they were already killing anyway than to starve?

The Walking Dead Season Finale: Does This Deleted Scene Hint At Terminus's Backstory?