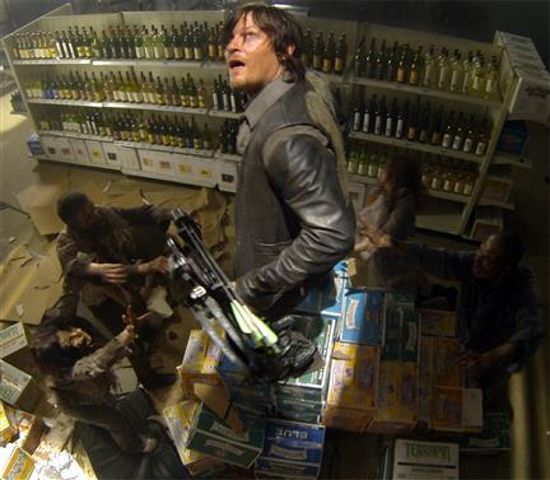 If you haven't watched the Walking Dead Season 4 premiere, then the title of this article probably makes no sense to you. However, we wanted to include the obligatory spoiler warning that we will discussing a scene that happened in the premiere episode. After The Walking Dead Season 4 Premiere, there was one question that seemed to be on everyone's minds. During a scene inside the Big Spot which the group was raiding for supplies, zombies that were walking around on the roof started coming crashing down through the ceiling. Also, on the roof was a large helicopter, which eventually came crashing down and almost smashed Daryl Dixon. Now, the big question is how the roof was able to support the helicopter, while the lighter weight zombies came crashing through. Shouldn't the heavier helicopter have fallen first? In an interview on Schmoes Know, Norman Reedus provided an answer to this question that has puzzled fans. Reedus explained, "Soft spots were on the roof, so as the zombies created holes as they fell through the soft spots, it opened up the roof is the logic behind that." The Walking Dead Season 4 airs on Sunday nights at 9 PM ET on AMC.