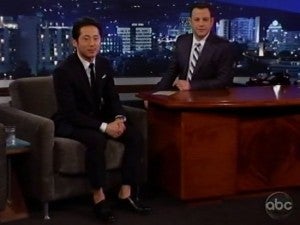 On Monday night's Jimmy Kimmel Live, Steven Yeun, who plays Glenn on The Walking Dead, was a guest. After Steven Yeun walked out, Jimmy Kimmel said his suit looked nice but he also pointed out that Yeun wasn't wearing socks. Steven Yeun said, "Yes, this is a point of contention for a lot of people." When Kimmel asked for who, Yeun replied, "Mostly just people who hate ankles." Yeun added, "You know why I wear this, it's actually pretty funny, it is comfortable, the ankle stuff is actually really comfortable, because you're free." Yeaun went on to explain that he was wearing the suit at the request of his father, because his dad wanted him to put his best foot forward at all times. Yeun also relayed a story about how his father got into a fight with someone who stole a lady's purse. The guy stealing the purse grabbed an umbrella and started swinging it at his dad, so his dad also grabbed an umbrella to fight back. Jimmy Kimmel quipped, "Have you ever considered the possibility that criminal was the Penguin and your father is indeed Batman." As far as The Walking Dead, Steven Yeun said his parents were proud, but they wanted him to come back to Korea to try to land some endorsement deals. When Jimmy Kimmel asked if he was the most popular person on the show in Korea, Steven Yeun indicated that maybe he wasn't. Kimmel quipped that he needed to work on his image. When Kimmel asked if the fans of The Walking Dead were too enthusiastic, Yeun said, "They're not too enthusiastic. I guess it's more like you've got to be very careful about when you let out what you do." Yeun then relayed a story about recently having a colonoscopy, and while the procedure was in process, he was asked about what show he was on. After he answered The Walking Dead, the guy behind him yelled out, "I love The Walking Dead. Yo dude, that's the dude." Yeun added, "The worst part of that was I felt the moment of recognition, because he was already started on the process."