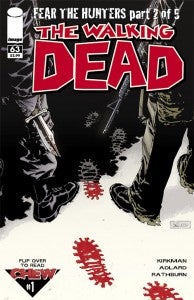 "As a creator, there's nothing more satisfying than hearing that a lot of people are interested in reading your book. The flip side of this is there's nothing more frustrating than hearing how people can't get a hold of your book to read," said John Layman, writer of the breakout new series from Image Comics, Chew. Centering around a detective who gets a psychic impression from anything that he eats, the series was an immediate hit and the first and second issues quickly sold out, prompting a reprinting. Even though those reprints won't be available until early August, Image Comics has announced that it will reprint the first issue of Chew, for free, in the back of issue number 63 of the Robert Kirkman series, The Walking Dead, slated for release on July 17th. The black and white full issue will be presented in a flipbook, allowing fans to get two comics for the price of one! Hitching this new book to arguably one of Image's best known and followed titles is a brilliant way to build interest in this intriguing new series. Layman is enthusiastic about the partnership with Kirkman and Image, and added that fans should still pick up the reprints in August for good reason, "If you're remotely interested in seeing for yourself what all theChew buzz is about, this is your chance. Of course, the black & white preview does not do justice to Rob Guillory's magnificent colors in the regular book, so if you like what you read in The Walking Dead, you'll have opportunity to buy third and second printings of issues #1 and #2 when #3 hits the stores on August 5th!"

"The Walking Dead" to Include "Chew" #1 in Next Issue!