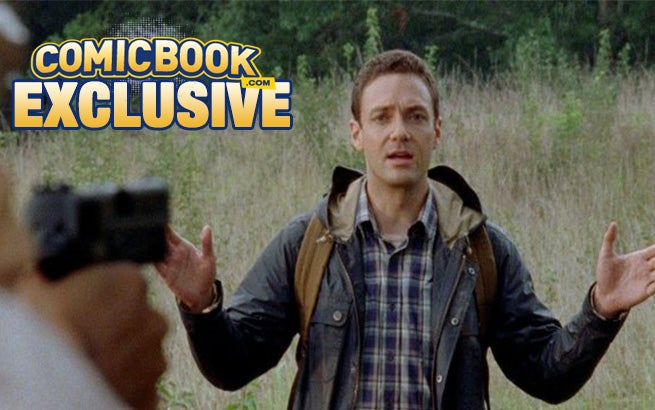 After being introduced in last week's episode of The Walking Dead, Aaron, played by Ross Marquand, has been in the spotlight all week. There's a ton of questions surrounding him and how closely the show will honor The Walking Dead comic book series with the portrayal of Aaron.

Marquand agreed to an exclusive interview with ComicBook.com to discuss these hot topics, but be warned mild spoilers follow for the comics and television series, especially if you're not familiar with the comics.

How was joining such a talented and beloved cast and group of fans? Have you been to a comic con yet?

I have not. I haven't had the pleasure. Hopefully I get to one of those Walker Stalker conventions soon. But the cast is amazing. Of course, when I was flying into Atlanta for the first time I wasn't sure what to expect, you know? Also, there's a great amount of pressure. Like you said, the fan base is so large and they're so passionate and I wanted to do the character justice. So, you know, I was nervous about that, I was nervous about meeting everybody, but the nerves just completely went away as soon as I met Andy and the rest of the cast. He was the first cast member I met, he greeted me with this great big hug, and welcomed me to the family… Everyone is just so, and still is, just the sweetest most fun person to work with. They really are great.

I know Gimple told you to make the character your own, but have you read the comics?

I have, yeah. There's a temptation to keep reading on into where it goes now, but I said, "well, I want to learn as much about Aaron as I can up to where we're at now." I'd like to be surprised as much as the fans would be (who don't read the comics, of course). I did do quite a bit of research, I bought all the compendiums and just read them as fast as I could while I was there. There is so much great source material there.

Then, of course, you realize that's an abbreviated version of the comics at large, so I would go on the weekends when we weren't shooting, I'd go to the local book stores and just keep reading. Even if I wasn't in them, they're just fantastic. They're really beautiful written and beautifully illustrated and I wanted to read up on where the story was going, whether or not it included Aaron.

Well, then, as I'm sure you know, Aaron is still around in the comics. After being introduced in issue 67 running up until 137, he's still around. In a show where cast members can't relax when it comes to job security, does this at least make you feel a little bit better?

It does, but of course, you know, there's no real job security on a show called The Walking Dead. And of course, after Rick's wonderful speech last week, you know that you wake up everyday acknowledging that you're already dead and you just go and do your job, that was actually a lovely speech to hear. I kind of teared up at that because that's how I feel going to work on this show. I don't take anything for granted and Aaron is still alive in the comics and I would love to stay on that show as long as they'll have me and as long as the character serves the story. But, you know, ultimately, that's up to the folks running the show, and the showrunner, and I'll bow out as gracefully as I can when that time comes. But hopefully they keep Aaron around because I love working on the show.

When you found out details of the character and the fact that he is gay, did that intimidate you at all?

Not at all. When I got the part, I never wanted to make my own personal sexual preference a focus about the character or anything, I just wanted to do the character justice as he's written in the comic books. That is ultimately my job as an actor on the show: to honor the source material and honor what Scott Gimple has in mind for the show moving forward. I'm really glad that they didn't shy away from that. I'm glad they didn't make it a watered down version of the character that didn't include his sexual orientation. I think that's important. Just because we live in a different set of circumstances now, of course there's gonna be any number of different types of people that are still out there. I think it's a bold choice by AMC to honor that.

Exactly. I look at it as a character trait and it's important to have that, yet isn't the defining characteristic of Aaron. It's just another part of him. Do you think that the addition of this character to the show will have any effect on people living in or with different views on the LGBT community? Do you want it to?

I hope so. Of course, you never want to think too much about the greater picture as an actor because ultimately you just want to do your job and do the character justice, but I do hope so. I think there's a great potential for a dialogue to open up about… At the end of the day this show really is about relationships, whether they're about a man and a woman, or two men or two women… I mean obviously it's a show about zombies, but I don't know if I have a warped perception of the show, but I don't think of it as a horror zombie show. I think of it as a drama. They have these characters who are trying to kill them throughout the show, but ultimately its about the relationships that keep these people going forward and how they make them stronger.

So, there you have it. Marquand will do his best to respect and honor the comic book series, which he is personally a fan of, while also attempting to make the character his own. What are you most excited about for in the upcoming episodes of The Walking Dead?

The rest of this interview, containing spoilers for season 5 episode 11 of The Walking Dead, titled "The Distance", can be found right here.