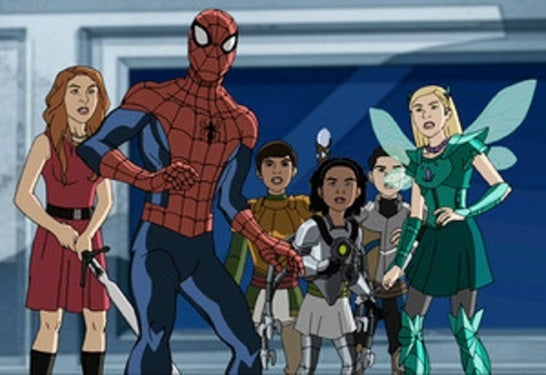 Can you feel the corporate synergy in the air? Disney has announced the first crossover between an animated Marvel series and a Disney Channel live action series.

The crossover will air as part of Disney Channel's "Monstober" programming campaign on Friday, October 10 at 9:30 ET, and will re-air on Disney XD on October 19 at 8 ET.

The episode is titled "Halloween Night at the Museum," and follows Jessie (voice of Debby Ryan) as she comes in possession of a medieval sword that Morgan Le Fey (Grey DeLisle) is after. Jessie and Spider-Man then team up to fight Le Fey. Ryan's Jessie co-stars Peyton List, Karan Brar, Cameron Boyce and Skai Jackson also guest star.

This is the second crossover between Marvel and Disney on television, following the Phineas and Ferb: Mission Marvel special.