There's no quicker way to get caught up on Mighty Morphin Power Rangers than the Deluxe Year One Edition, but is it the right collection for you?

That answer will be different for every fan, but we're here to give you an overall breakdown that you can judge for yourself. The first thing that fans will see is the foreword written by Jason David Frank, who of course portrays Tommy in the television series. For new fans, this is a great way to learn about one of the most popular Rangers, and for longtime fans, it is just cool to have his words included.

After that, you're in store for a year's worth of Power Ranger stories, which pick up after Tommy has already joined Zordon's side. This allows the series to jump over some of the well-known material and explore the lingering effects of Rita's hold on him in a more in-depth way.

Honestly though, you'll probably be hooked by that gorgeous first page, and the art throughout the first year of stories never fails to impress either. One need only look at every Megazord and Dragonzord moment as proof. Credit for that goes to the talented team of Hendry Prasetya, Thony Silas, Jonathan Lam, Daniel Bayliss, and Corin Howell.

Rita has never been more lethal, and the other Rangers never more grounded. That is all thanks to series writer Kyle Higgins, as well as Steve Orlando and Mairghread Scott. Together they deliver a bright and colorful universe just like fans remember with a layer of depth and reality that those same fans will grow to appreciate.

Fans are also introduced to the world of Lord Drakkon, who has quickly become one of the most popular villains in the franchise. This is one of the best Power Rangers stories in years, and any fan will find something to love. 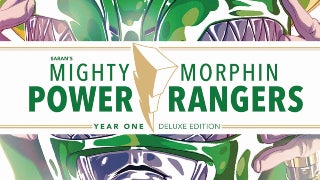 That includes several backup stories, including "From Here To Despair" starring the Red Ranger and Ninjor, "What Time Is It" featuring Goldar and the Rangers, and the complete "Adventures of Bulk and Skull". You'll also get all of those gorgeous covers in one place, as well as behind the scenes sketches from the series, including a number of alternate designs for Lord Drakkon.

For all the material you get, adding the Deluxe Edition to your collection is an easy yes, and you won't want to let it pass you by.

The Mighty Morphin Power Rangers: Year One Deluxe Edition is in stores now.

Review: 'Mighty Morphin Power Rangers Year One Deluxe Edition' Is a Must for Any Fan