The Ranger Slayer made quite the debut, but according to the team behind the character, fans haven't seen anything yet.

Spoilers incoming for Saban's Go Go Power Rangers #9, so if you haven't read it yet you can check out more of our Shattered Grid coverage here.

ComicBook.com had the chance to sit down with Go Go Power Rangers writer Ryan Parrott, BOOM! Studios editor Dafna Pleban, and Director of Power Rangers Content for Saban Brands Melissa Flores, where we discussed the newest addition to the Power Rangers mythos the Ranger Slayer.

Specifically her origin story, which fans see a glimpse of in Go Go Power Rangers #9. Fans might not see how she got her Bow of Darkness or why she commands the Gravezord, but the team is promising an origin story that tugs at the heartstrings.

Just like in previous issues, the first few pages of each issue will take a step back in time, and that's how fans will learn more about how Kimberly eventually embraced the role of Ranger Slayer in Drakkon's universe.

"One of the things that Ryan does incredibly well in the Go Go series is he kind of does little origin cold opens for our villains," Flores said. "He's done Baboo and Squatt and we kind of played with that a little bit in our annuals with Goldar and Finster but what he has done with these little tragic ... they're so tragic but they're so compelling with these joke characters from the series that give them so much depth. So it doesn't feel out of place when you see this happening also were seeing this origin of the Ranger Slayer and how that pays off."

If you've seen what Parrott did with someone like Squatt, we can't wait to see what he's got in store for the Drakkon universe's Kimberly. 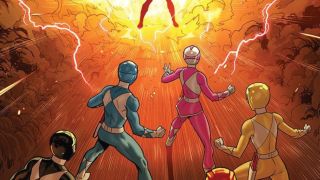 You can check out the full preview in the gallery, and you can find out more about Shattered Grid here.

Saban's Go Go Power Rangers #9 is written by Ryan Parrott and drawn by Dan Mora with colors by Raul Angulo and letters by Ed Dukeshire. Variant covers were provided by Miguel Mercado, Audrey Mok, Dylan Todd, and Natacha Bustos. You can check out the official description below.

"As the Rangers deal with the fallout of Rita's sinister plan and Matthew's startling return, a new threat emerges with a shocking connection to Lord Drakkon."