Warner Bros. Television and The CW have released a first look at Riverdale's forthcoming musical episode.

In four new photos, fans can get looks at Archie, Betty, Veronica, and Cheryl Blossom in action on stage while director Kevin Keller and Fangs Fogarty, the guy fans have voted most likely to end up with Kevin this season, watch from the sidelines. 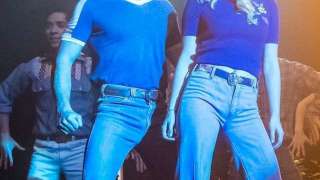 You can check them out (via Entertainment Weekly) in the attached image gallery.

The Riverdale episode, titled "A Night To Remember," will be framed as a documentary by Jughead Jones.

Below, you can read the official announcement form the Riverdale High Drama Department, which doubles as the official episode synopsis:

The Riverdale High Drama Department (RHDD), in conjunction with the Lodge Family, is pleased to present as its Spring Production, "Carrie: The Musical," a dark-yet-catchy cautionary tale exploring the gritty realities of small-town high school life. Future Tony Winner Kevin Keller helms as director, combining iconic elements from the novel, 1976 movie, 1988 Broadway production, 2012 Off-Broadway revival, and 2013 remake to create a retro-yet-timeless interpretation of Stephen King's horror classic. Additionally, a behind-the-scenes documentary following the making of "Carrie: The Musical" will be filmed by student videographer and journalist Jughead Jones.

The book of "Carrie: The Musical" was written by Lawrence D. Cohen, with lyrics by Dean Pitchford, and music by Michael Gore. The show debuted on Broadway in 1988 and ran for only 16 previews and 5 performances. But "Carrie" was given award-winning new life when it was reworked and revived Off-Broadway in 2012. It includes the unforgettable songs "The World According to Chris," "A Night We'll Never Forget," and "Unsuspecting Hearts."

Riverdale airs on Wednesday nights at 8 p.m. ET/PT on The CW. "A Night To Remember" airs on April 18.