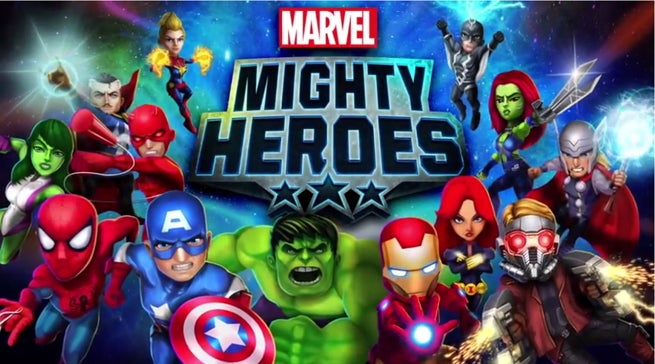 Mobile game developer DeNA and Marvel Entertainment have announced Marvel Mighty Heroes, a real-time co-op brawler currently in development for iOS and Android that features characters from the Marvel Universe. Marvel Mighty Heroes features real-time cooperative gameplay for up to four players. For a limited times, potential players can visit www.MarvelMightyHeroes.com to vote for Hulk or Rocket to be a free hero, for a limited time, when the game launches.

Marvel Mighty Heroes let’s players choose Marvel characters, including Iron Man, Groot, Captain America, Star-Lord, Hulk, Thor, Black Widow and Spider-Man. Players assemble a team of heroes and villains, featuring a mix of skills and special abilities. Multiplayer in Marvel Mighty Heroes will give players a chance to compete for a spot on the leaderboard, or team-up with friends or other players for cooperative play.

Check out the announcement trailer below:

"Building off of the success of Marvel War of Heroes, our first Marvel-licensed title, Marvel Mighty Heroes is a fast and tactical battle game that will combine evolving Marvel stories with enthralling co-op and competitive multiplayer gameplay,” said Barry Dorf, Vice President of Partnerships and Alliances at DeNA, in a press release. “Marvel fans and gamers alike will have the chance to create the ultimate team of Super Heroes and Super Villains to take on waves of enemies from the Marvel Universe.”

Marvel Mighty Heroes will be free to download on iOS and Android devices in 2015.

Bleach Makes a Wild Appearance in One Fan's College Class

Naruto Reveals How Far Kawaki Will Go For Boruto