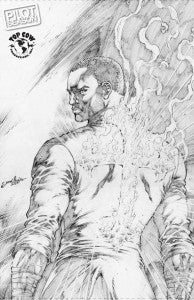 In the Pilot Season competition, eight different creative teams produce a one-shot comic book in hopes of winning over fans. After all the books have been released, fans get to vote for their favorite one-shot. The winner of Pilot Season will get to produce a mini-series for Top Cow Productions.

Over a million votes were cast in last year’s competition, and writer William Harms and artist Jerry Lando won with their one-shot 39 Minutes. In addition to Chicago Bear Lance Briggs, the Pilot Season creative teams this year include award winners, screenwriters, and stellar art teams.

"After five years, Pilot Season has become a comic industry institution that really embodies Top Cow's mantra of 'We Create...' and gives fans unprecedented control,” said Top Cow Publisher Filip Sablik. “This year's slate of contenders is the most diverse in creators and genres yet.”

Lance Brigg’s one-shot comic book is called Pilot Season: Seraph #1. The comic is written by Lance Briggs and Phil Hester with art by Jose Luis. Seraph #1 is scheduled to be released on November 23, 2011. Here is a description of the series released by Image Comics and Top Cow Productions: “The angelic warrior now known only as Seraph was once a sinner. After living a life of selfishness and sin, personal tragedy drove him to kill himself. Plucked on his way to Hell by Heaven, the man was made Heaven’s soldier in an endless battle. Charged with fighting an ancient war, but bound by God’s law, can Seraph triumph over opponents not restricted in the same way and regain his faith in the process?”