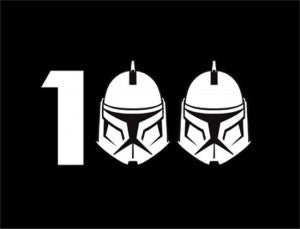 Star Wars: The Clone Wars is celebrating its 100th episode Saturday, and Lucasfilm Animation has released a special anniversary video, which features highlights from all five seasons of the animated series. The 100th episode of Star Wars: The Clone Wars is called “Missing in Action” and will air on Saturday, January 5th at 9:30 AM ET on Cartoon Network.

The “Missing in Action” episode introduces Gregor, a Republic clone commando suffering from amnesia who has seemingly forgotten his true nature. The Star Wars: Clone Wars series is created and executive produced by George Lucas, and it continues the story of classic characters like Anakin Skywalker and Obi-Wan Kenobi, while adding new heroes, villains, rogues and sidekicks to the Star Wars mythos.

“Thanks to our partnership with Cartoon Network, we have been able to bring The Clone Wars into millions of homes not only in the United States, but around the world,” said Tom Quinn, who is Lucasfilm’s Head of Worldwide Distribution. “We appreciate the support they have given the series and their enthusiasm for the brand.”

Black Lightning Recap With Spoilers: The Pierce Family is Hunted in "The Book of Markovia: Chapter Two: Lynn's Addiction"

The Witcher Fan Recreates Geralt and Jaskier in LEGO