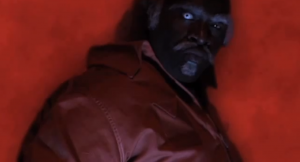 Throughout the day, the official Facebook page for Adult Swim's The Boondocks, based on the long-running comic strip by the same name, teased a big announcement coming later today, and fans of the series were salivating.

After all, it's been years since new episodes aired, and frequent voice director Andrea Romano has been one of a number of people associated with the show that have promised its return time and time again.

Instead, fans of the series were treated to the news that the filmmakers are developing a live-action feature film based on the popular supporting character Uncle Ruckus. The character is an obese black man with a bad eye who spews venom and hate speech directed at other black characters. He can be a divisive figure, even among the show's fans, but those who like the character, really like the character.

The producers are looking to fund the film via Kickstarter.

“There’s always been interest in a live-action Boondocks movie, which to me was out of the question considering Huey and Riley are essentially impossible to cast. The animated feature would cost around $20 million, but a live action Uncle Ruckus movie could cost a fraction of that. So just for the hell of it we had the costume made and it was pretty amazing. To see Gary actually transform into Uncle Ruckus... it’s quite the surreal experience.  I never expected the transition to be so completely seamless.”

They're looking for $200,000 to fund the film, which is one percent of the aforementioned $20 million, and the film is set to be written and directed by McGruder himself. A teaser trailer has produced, which features Gary Anthony Williams as Uncle Ruckus.

Williams is the voice actor who played the character on the first three seasons of The Boondocks on Cartoon Network.