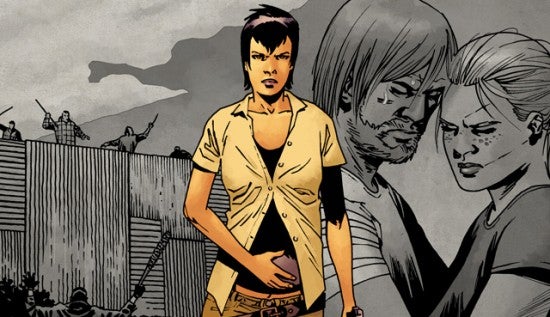 Now that the issue has hit the (digital) stands and is widely commercially available, we can discuss the plot point and its ramifications for the series going forward.

Before we do, though, we should remind everyone that this is CLEARLY a spoiler article, and you are WARNED as such. 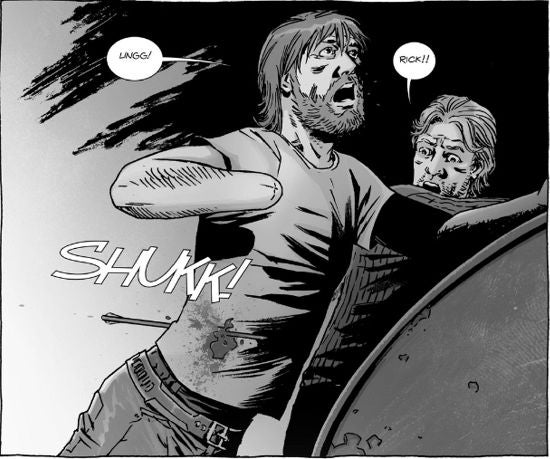 During Rick's ongoing battle with the forces of Negan's Saviors in "All-Out War," he foolishly trusted one of Negan's inner circle, Dwight, who claimed to have defected. To the surprise only of characters living inside of the comic, but not to anyone who's read the book before, Dwight took the first opportunity he had to fire a crossbow bolt into Rick.

There’s been some question of late as to whether Rick Grimes might not live through the “All-Out War” storyline. Kirkman has always said that no one is safe in the book, and the solicitations for the issues coming out right after the story feature an entirely new group of survivors and “A new beginning.”

So people took it pretty seriously when, as seen above, Rick took a crossbow bolt to the back in a doublecross from Dwight.

Of course, we noted at the time that while Negan and his invaders from outside the walls had begun coating their weapons with walker guts, infecting them so that anyone whose skin they pierced would die, reanimate and turn on their friends, they had done so after Dwight infiltrated Rick’s group and it was unlikely Dwight had done so himself. That still leaves the matter of shooting an arrow through Rick’s kidney in the middle of a battle in a world with not much in the way of decent medical care.

That's what we figure, anyway. It had been mentioned that crossbow bolts wouldn't be properly weighted if coated up with the guts, and there was no indication that Dwight had rethought that idea before firing one off at Rick. 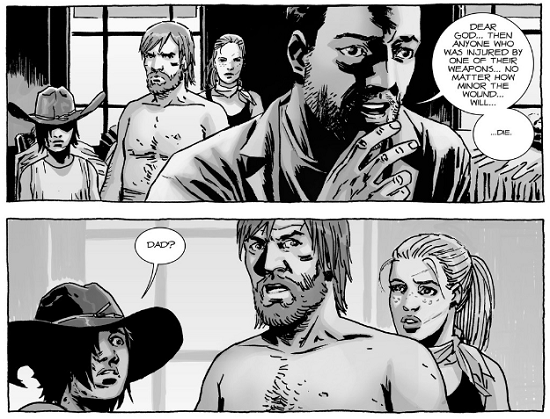 This is just moments after the doctor attending to Rick's group of survivors realizes that the weapons outside have been contaminated. And the follow up -- Carl and Rick looking shocked -- is as close we get to a "final fate" this week.

When The Walking Dead #100 came around, there was a sense that a big death was inevitable for that issue. It was, after all, a big, round number and in recent years (arguably right after Superman  #75 in 1992) comics often acknowledge every twenty-fifth issue as its own little mini-landmark. Could Rick die in next month's The Walking Dead #125? Certainly that's what it seems Kirkman wants fans to think.

And, yeah, it could happen: if the crossbow bolt was contaminated and it just wasn't communicated well to the readers, Rick could develop a fever and die like the others (he hasn't done so yet). On the other hand, the absence of a fever at this point (all of the Saviors' other victims are breaking out already) might suggest that Dwight's crossbow bolt was clean and that Rick will be fine.

Arguably the next issue woni't be so much about Rick dying from the crossbow bolt, but whether someone in the group will take it upon themselves to put the Saviors' victims out of their misery, whether the rest of the community will let them and whether the as-yet-symptomless Rick will be among those euthanized if that happens.

At this stage, it looks like barring a major plot twist or characters operating entirely without common sense, Rick will make it out of the story -- or at least this particular injury -- intact. But neither a major plot twist nor characters operating entirely without common sense are particularly alien concepts to the world of The Walking Dead, so anything can happen.

That said, a verdict on Rick's "final fate?" Our verdict is that if Kirkman is to be taken at his word there, it looks bad for Rick. If so, though, he may have to do some creative contortions to justify the move.

What might those contortions involve? Well, take a look again at the shot above, where Rick is being pegged by the crossbow bolt.

There are two small and light, but still visible, specks in its flight path. Could that be tiny bits of gore, suggesting that the bolt was, somehow, indeed contaminated? Again, we're not really sold on that theory yet...but it certainly could be true and, if the story moves forward and Rick develops a fever, that could be used as justification.

The Walking Dead: The "Final Fate of Rick Grimes" Revealed