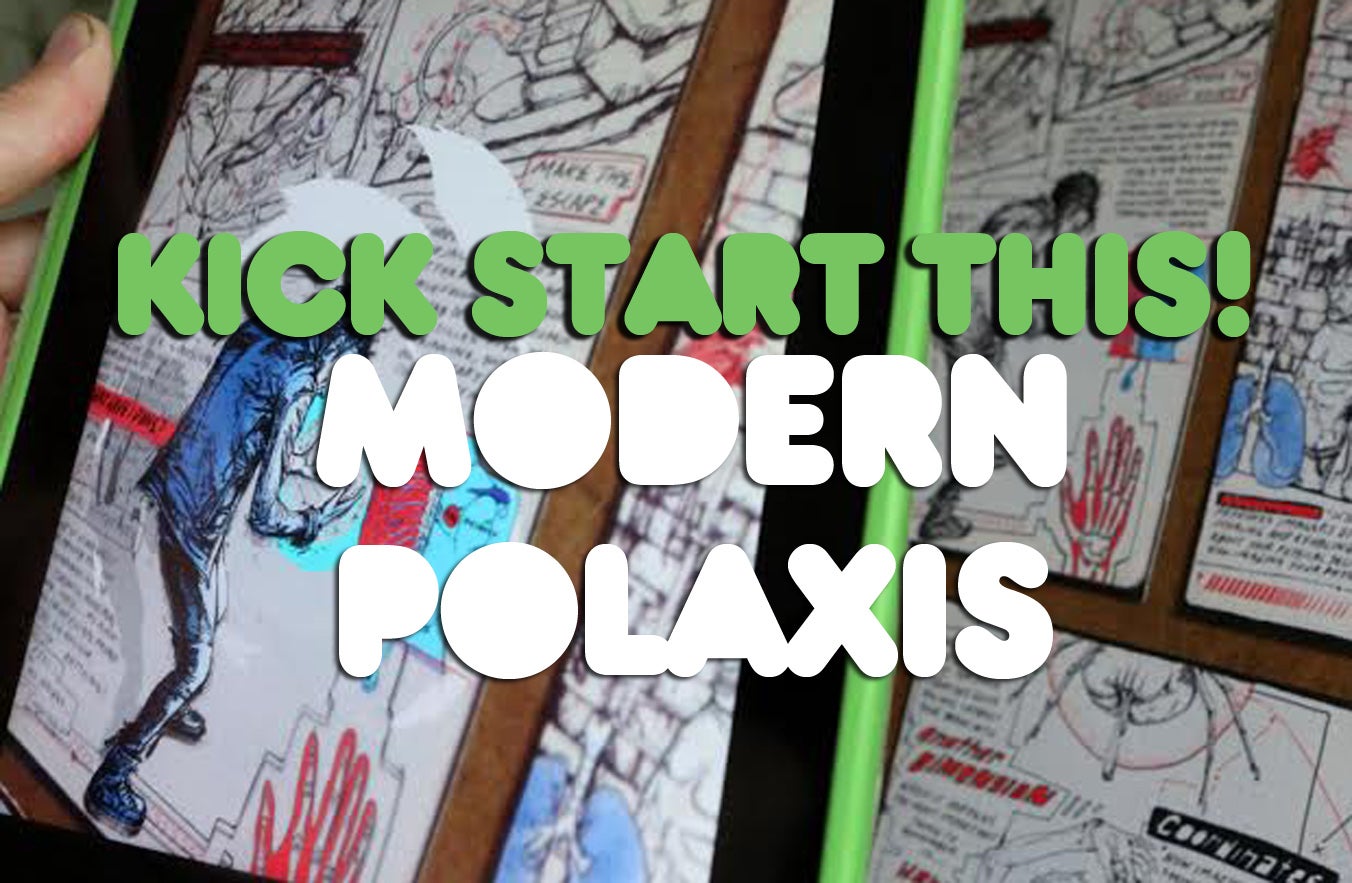 We get sent a lot of crowd fundraising projects to write about at ComicBook.com (please keep 'em coming) but it's rare that we see something that could change the way we look at comics.

Literally. So when I saw the kickstarter for Modern Polaxis I knew we had to cover this one. Modern Polaxis is a augmented reality comic - using an iphone or ipad to view the printed page you get a added level of, shall we say 'reality?' Maybe not, maybe it's just the insane mind of the artist but this ones worth looking at.

ComicBook.com readers qualify for a special deal from the creator SUTU

"If you’re reading this article on Comicbook.com and decide to back the project. When you make your pledge send Sutu a message through kickstarter, include the secret code “I believe Polaxis”, and Sutu will sign your book (and you will save $10). **This applies to the following rewards ‘Printed Book’ and ‘Special Book Combo’ 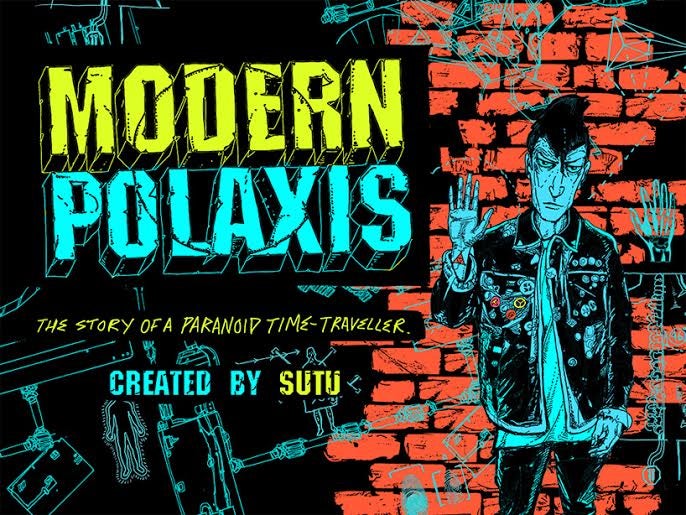 Scroll down for the kickstarter video.

You can support this project at kickstarter.

Comicbook.com: Give us a quick summary of Modern Polaxis and why people should kickstart it.

SUTU: Modern Polaxis is a paranoid time traveller who keeps his secret journals hidden away in a layer of Augmented Reality. The reader can see this hidden journal using an iPhone or an iPad.

Modern Polaxis is and ideal project for the kickstarter world.  It’s a new thing so it doesn’t fit in to the established market places of digital comics or printed comics. Kickstarter is all about helping to create the new. People support projects they believe in and want to see happen.   In the future it will be quite normal for us to read comics like Polaxis with the aid of Google glass or Oculus Rift but we’re not there yet.Polaxis is an important step in that direction.

I love the art style, using the page the way you have... little or no paneling. Did you have an influence or reason for doing it this way?

Ha! Thank you.  I’ve been carrying moleskine diaries around with me for years. When you get struck by inspiration or a sudden idea, there’s not always time to organise your thoughts in to perfect balanced panels. The ideas often spew on to the page in a chaotic mess. I love this chaos.  My protagonist, Polaxis is much crazier than I am, and he’s convinced of other dimensions AND that he can time travel. SO, his journal should be more crazy looking. (I attached a photo of my moleskines)

Having said that, I'm also experimenting with the layout to see what works best with the AR.  So in the last week I’ve done drawings which I’ve then had to cut up (in Photoshop) and rearrange in order to get the best results.  I’ve made some great discoveries too. For example, there is a tendency with AR to have things jump off the page, but this takes your attention away from the book,  but you can also make it look like there is a hole in the page or have sections of the page drop away, which is like opening another dimension and this draw you into the book. 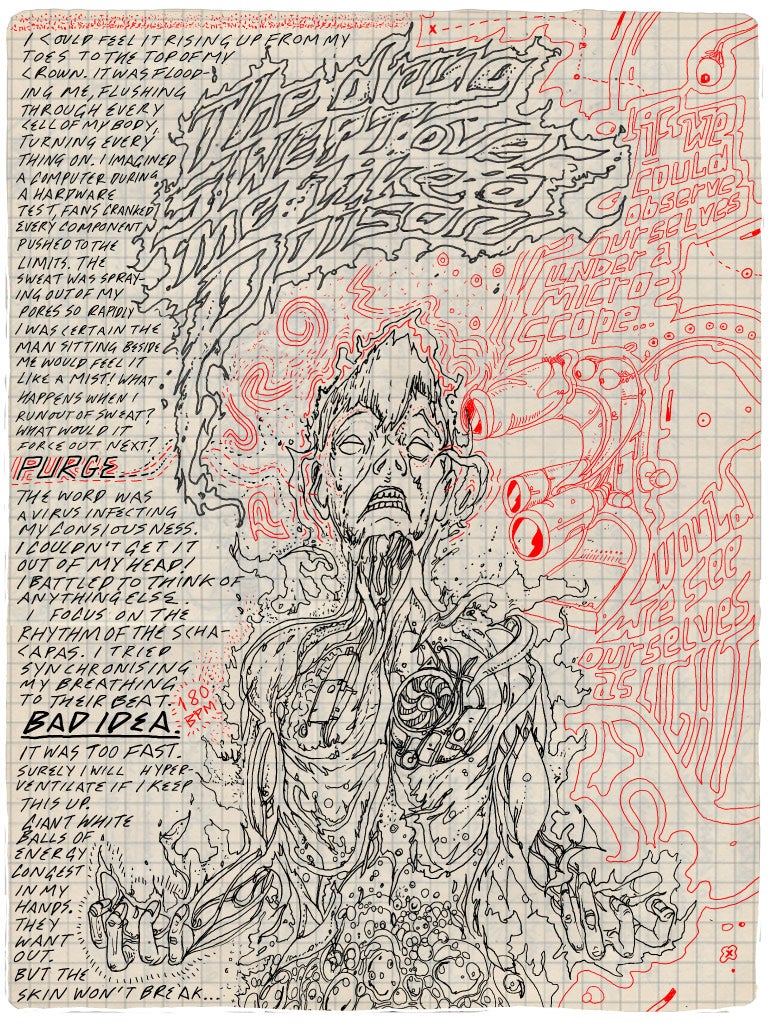 You're using both a tablet and paper to create Modern Polaxis - which do you prefer?Or do each fit their need?

They both serve a purpose.  Drawing on paper is subject to the natural world of smudges, coffee stains, paper creases and imperfections. All these things help to create a real journal feel.  It’s too easy to make everything perfect on the computer and in that quest for perfection we often lose the raw energy that creates the artwork in the first place.  But, having said that, this particular project requires a certain amount of precision as the artwork must perfectly align to the AR content. So being able to tweak things digitally, helps a lot.

Have you tried pitching this idea through and of the normal publishers?

I have some books published through Gestalt in Australia and they’ve expressed some interest. The thing is, I’m having a Polaxis exhibition in Switzerland as a part of the Fantoche Animation Festival this September.  I was only going to show some artwork but I thought, wouldn’t it be rad if I rocked up with a whole comic book done.  There’s no way a big publisher could deal with that kind of time frame. So I launched the kickstarter to do it independently.   After the kickstarter and the exhibition, I will send the book off to publishers to check out.  Ultimately I want lots of people to discover this story and then discover the story inside the story :)  If it’s enjoyed by a lot of people it will at the least present a refreshing new discussion in the age old digital versus print debate.

Do you think that interactive comics could become a main stream idea?

Someone just tweeted my Polaxis kickstarter link and added:  "Augmented reality #comics(!!). The future is going to be awesome. “

To answer the question, YES! I think anyone born in the age of the internet is naturally inclined to interact with information and this includes narrative. On a daily basis we hop between websites to piece together narrative, whether we’re organising our day by searching for shops and bus routes or trying to figure out why the plane went down. All these snippets of information (images, text, audio, and video) are assembled together in our minds to create the story.  Comics are already a powerful visual story telling tool, marrying comics with the other media has the power to activate the other senses and create an even more immersive experience.  As a story teller I can only hope to create a world where my readers can become truly immersed.

Mobile devices have revolutionized digital content and there is already loads of interactive storybooks and comics on the apps store. The advent of Google glass and the Oculus Rift will only perpetuate this movement.  These devices were made for comics like Polaxis.  And Polaxis in turn is an important step toward creating content for those devices.

What were some of the largest technical hurdles that you faced?

Well,  we had to create our own program to create the content for starters.  That was the first big hurdle.  Our program is called Boomcore and we’ve been using it to create digital interactive comics like Nawlz and Neomad for the last 3 years.  The Augmented Reality functionality is actually the latest evolution of Boomcore.   We’ve been developing this over the last year.   Originally it took a while for the AR content to load, but now it just snaps in to action immediately. When we got that working it was a magical moment. “Wow, it just works!” I kept saying.

The next problem is the memory. The poor little iPhone and the iPad sh*t themselves when you try to load too much animation and audio.  So we’re always looking for ways to optimize the code and assets. 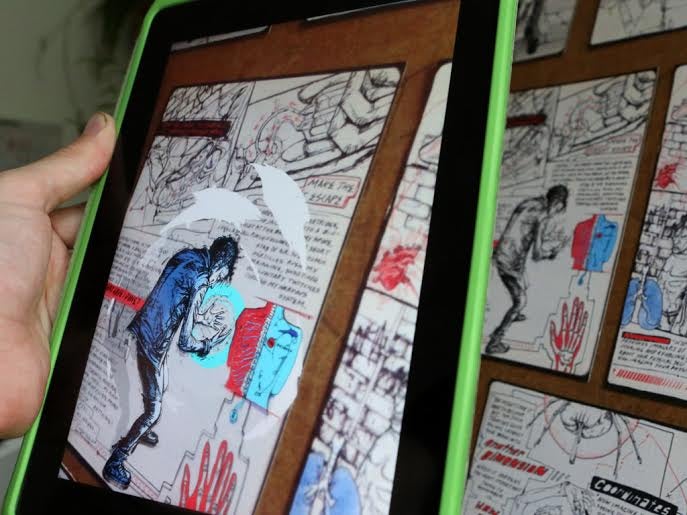 Did you need to learn any programs to put the book/app together?

Generally speaking, I write, illustrate, colour, animate and do some very basic programming.  Lukasz does all the hard core programming. I use to program, but I’m shit at it. And next to Lukasz, I’m really really shit. Lukasz is constantly learning new code and mixing it with old code to create more new code.  My brain hurts just thinking about that last sentence.   I’m very happy to have Lukasz around. He teaches me how to use the programs enough so I can to work experimenting.  I generally go away and play until it breaks, then Lukasz has to fix it.  I haven’t broken anything for a while, which means Lukasz has done a good job :)

It took me a moment when I saw that you've published the book with a spiral bound to realize why you did that. It's great that it also makes it look like a bit of a journal which is what the book itself is... [kind of a question, but more of... was that you're through process?]

The effect of the AR works best when the pages are laying flat.  The Wire-O binding produces the best lay flat result, but coincidentally creates a nice notebook feel (which is a bonus!)

Any advice to someone who might want to try something similar?

Find a good programmer. Do lots of experiments.  Start off small, one page or one artwork, get that working nicely and move up from there.  Goodluck!

Kickstart This: The Augmented Reality Comics of Modern Polaxis

5 PS4 Games Currently on Sale for $5 or Cheaper