Few hunters are as good as Vlad, and the latest issue of AfterShock's Brothers Dracul gives us a tiny glimpse of how infamous he is destined to become.

In this new preview of Brothers Dracul #4, Radu worries a great deal about his brother, but not necessarily in the way you might think. As he says in the preview, he isn't concerned with his physical safety, as there probably aren't many people on earth who can slay Vlad.

Instead, he's worried about the anger that drives him to be such a skilled hunter. If he falls to that anger, letting it consume him, Radu fears he could become something else entirely. The crazy part is, he's far from wrong.

You can check out the full preview of the new issue in the gallery, and the official description can be found below.

"The Brothers Dracul-Vlad and Radu-have skilled at slaying the undead. But they soon discover that there is more than one type of vampire, and some are more difficult to kill than others. Especially when the brothers themselves are on the verge of turning against one another! 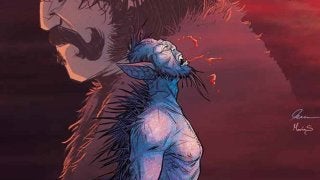 From writer Cullen Bunn (DARK ARK, UNHOLY GRAIL, X-Men Blue, Deadpool, Venom) and artist Mirko Colak (UNHOLY GRAIL, The Punisher) a tale of brothers and blood that HAD to be told at AfterShock Comics!"

You can pick up Brothers Dracul #1 right now, and the official description is below.

"The legend of Vlad the Impaler is the stuff of nightmares. The inspiration for the most iconic of monsters—Dracula—Vlad tortured and murdered thousands of victims. But what turned him into such a depraved killer? The truth lies in his teenage when Vlad and his brother Radu were held hostage by the Ottoman Empire. During this time, the brothers learned many things—archery, riding, the art of combat, matters of court...and how to stalk and slay vampires."

One Piece: Baki's Creator Once Tried to Draw the Straw Hats with Controversial Results

PS4 Gets Surprise New Horror Game Ahead of Halloween