We might not have a sequel to Disney's Zootopia just yet, but thanks to Dark Horse we do have a glimpse into the cast during their school years in our preview of Disney Zootopia: Friends to the Rescue.

Friends to the Rescue is a graphic novel for younger readers and features a young Judy Hopps and Nick Wilde as they have fun adventures at the Bunnyburrow county fair and Hedy's birthday party. As you can see in the preview, Hopps' friends are all excited for the county fair for a variety of reasons including carrot flavored funnel cake (which sounds phenomenal by the way) and a hot air balloon ride, but they might miss all of it thanks to their lovable sloth buddy Dinah.

Over in Nick's world, it's all about Hedy's birthday party, but to take part you kind of need to be invited first. Luckily it looks like Nick's invitation was just delayed, and you can check out the entire preview in the gallery.

The full preview for Disney Zootopia: Friends to the Rescue can be found below.

Judy Hopps is excited for the fun at the Bunnyburrow County Fair, but her friend Dinah has to sneak out of the house to join her! When Dinah stumbles into trouble, it takes both Judy and Dinah’s talents to ensure that they both make it safely home. Meanwhile, at his friend Hedy's birthday party, Nick Wilde learns it's the thought that counts. While he might not have enough money to buy a gift, Nick has other talents that he puts to good use for a truly unforgettable celebration. 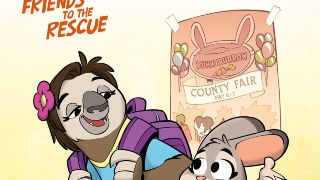 This story collection from writer Jimmy Gownley (Amelia Rules!) and artist Leandro Ricardo da Silva, with colors by Wes Dzioba (Serenity, Star Wars: Invasion, Aliens vs. Predator: Three World War) and letters by Chris Dickey (Cable, X-Men: The Hidden Years), shares two tales of how talent and teamwork can overcome sticky situations. Written for younger readers, this volume will appeal to Zootopia fans of all ages with its adventurous characters and engaging artwork. Also included in this volume are a variety of story-related activities and special features!

*Fun stories for Zootopia fans of all ages!

Disney's Zootopia: Friends to the Rescue is in stores now.

Preview: 'Disney Zootopia: Friends To The Rescue' Is Perfect For Young Readers

Former Batwoman Star Ruby Rose Hospitalized, Reveals She Struggled To Find ER That Would Accept Her

The Legend of Zelda: Breath of the Wild 2 Gets Disappointing Update From Nintendo Insider

Nintendo Insider Leaks Next Direct and Its Game Announcements