Dark Horse has a slew of anticipated new books coming this April and now you can get a first look at their gorgeous covers.

The first two covers are from Doctor Star & The Kingdom of Lost Tomorrows: From The World of Black Hammer #2. Each one offers a very different vibe, as the first offers a rather chaotic scene between Doctor Star, a massive monster, and a sick patient on a hospital bed.

The second is the polar opposite, showing Doctor Star standing next to a telescope with the doctor in much better spirits. 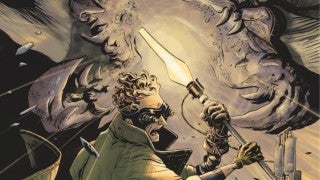 Also featured in the preview is the lovely cover to Mata Hari #3, which features a snapshot of her journey from the Dutch East Indies to the streets of Paris. Last but not least is the cover to Vinegar Teeth #4, which brings the action-packed series to a close.

You can view all of the covers in the gallery, and the official descriptions have been listed below.

Doctor Star & The Kingdom of Lost Tomorrows: From the World of Black Hammer #2 (of 4)

"From Lady MacLeod to Lady Godiva. Mata Hari looks back at the death and despair that ravaged her life as a wife and young mother in the Dutch East Indies. After a few short years she leaves it all behind, changes her name, and heads to Paris, joining the Cirque. Mata Hari is born, and the world hasn't seen anything like her before.
For mature readers."

"Chaos breaks loose in Brick City as a horrific space monster reigns terror on the streets. Only Detective Buckle and sidekick Vinegar Teeth can put an end to this madness in this final conclusion to the cult horror series."

Doctor Star & The Kingdom of Lost Tomorrows: From the World of Black Hammer #2 lands in comic shops on April 4, while Mata Hari #3 and Vinegar Teeth #4 hit shops on April 18.

One Piece Cosplay Proves Boa Hancock is a Princess