The new preview gives readers a peek into the mind of Mr. Calhoun, who when he isn't picking his latest steed on the ranch is looking for Number Five and is all for a sustainable vegan meal. We also get a look at the impending space-bound mission, one that promises to be quite dangerous, though maybe someone should have told all of the passengers that before the took off. You know, it would've been polite is all we're saying.

You can check out the full preview in the gallery.

ComicBook.com's Megan Peters reviewed the first issue of Hotel Oblivion, saying "As a welcome home, The Umbrella Academy: Hotel Oblivion #1 reads like a familiar friend, but it doesn't aim to revolutionize the series Way and Bá created so many years ago. Readers will slip back into the series with ease, but its slow push back into publication will leave fans who hoped for a more explosive comeback scratching their heads. Still, this run's debut issue sets up a narrative hook that promises to expand a full-on thriller, and it does so with a touch of surreal poise."

You can read the full review here.

The Umbrella Academy: Hotel Oblivion #2 is written by Gerard Way and drawn by Gabriel Ba and Nick Filardi, with a cover by Gabriel Ba. You can check out the official description below.

"As big-business interests close in on the overgrown adolescents of the Umbrella Academy, unlikely alliances are formed and two brothers head into deep space.

If you're unfamiliar with Hotel Oblivion, here's the description for issue #1 to get you up to speed.

"Faced with an increasing number of lunatics with superpowers eager to face off with his own wunderkind brood, Sir Reginald Hargreeves developed the ultimate solution.

Now, just a few years after death, his Umbrella Academy is scattered. Number Five is a hired gun, Kraken is stalking big game, Rumor is dealing with the wreckage of her marriage, a rotund Spaceboy runs around the streets of Tokyo, Vanya continues her physical therapy after being shot in the head--and no one wants to even mention Seance until issue #2. 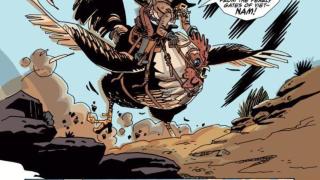 With a Netflix series soon to debut, the award-winning and best-selling superhero series , stranger than ever.

And their past is coming back to hunt them."

The Umbrella Academy: Hotel Oblivion #2 is in comic stores on October 31st.