Spoilers ahead for Justice League #7, out this week.

This week's Justice League #7 ended with the departure of a team member -- perhaps not surprising, considering the last two issues have centered on a kind of psychic phenomenon that has put the team in an unstable emotional state and put the League's members at odds.

A cosmic plague wormed its way through the Justice League, infecting Green Lantern Jessica Cruz through her ring. It played on the League's fears and insecurities, causing them to make a series of bad decisions including Superman attacking Batman, Barry Allen becoming creepily obsessive during a date with Cruz, and more.

And, Cruz explained as she told Barry she was leaving the team, she could feel all of it -- what was openly expressed and what wasn't, and not just from Barry but from everyone thanks to her tie to the source of the plague.

The exchange between Allen and Cruz in #6 felt creepily like a guy getting drunk and trying to pursue a woman against her will on a date. Cruz's inner monologue confirmed that was the image writer Bryan Hitch was going for. It was awkward to read, so one can safely imagine that from Cruz's perspective it was not easy to live through. The fact that after a first date like that, Allen continued to push -- "what about us?" -- as she was leaving the League at the end of #7 seems odd, but maybe it's a storyline that Hitch expects to follow up on in the future.

When Allen told her that the League needed her, Cruz said no, telling him that she was only there because Hal Jordan told her to be, and now it was time for her to make her own decision. In Sam Humphries's Green Lanterns, Cruz and Simon Baz are teamed up, sharing a power battery, but since the League has thus far been portrayed as responding to crises rather than dealing with longer-term or larger-scale problems, an unwillingness to suit up with the League likely won't impact Cruz's partnership with Baz much.

It's not yet clear whether Cruz will rejoin the team for the forthcoming Justice League vs. Suicide Squad crossover, or whether she was simply left on cover art in order to preserve the surprise of her departure in this week's Justice League issue. 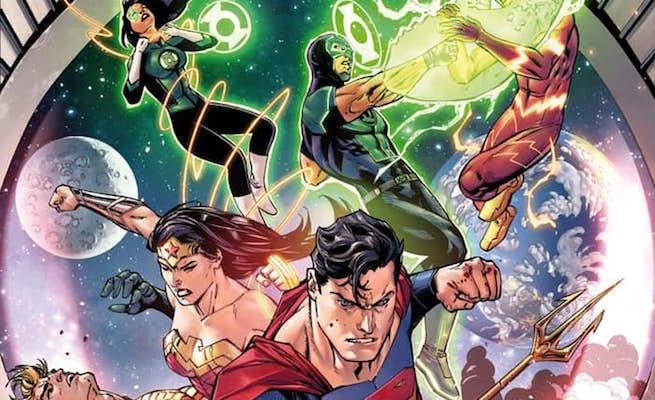 Of course, for casual viewers, many of whom have come to the Justice League through other-media adaptations, it likely feels confusing and redundant to have two Green Lanterns, and since the name of the game in Rebirth is bringing in new or lapsed readers, outside considerations might have played into the decision to have Cruz exit.

Still, sending away a woman of color either becuase "we didn't need her" or because a powerful and well-placed white guy made unwanted advances her way will likely strike a bad note with some fans. That the departure hasn't blown up on social media is likely a dodged bullet, especially since Justice League is arguably the only top-tier DC title not receiving uniformly good reviews since the Rebirth initiative started in May.

Justice League #8 kicks off a new storyline in two weeks, without Jessica Cruz.

Neil Gaiman Chastised Sandman Star for Being Too Much Like Batman

AEW's Wardlow is a Huge Superman fan, but Didn't Plan on Man of Steel Shot