DC has provided ComicBook.com with an exclusive preview of next week's Plastic Man #3 from writer Gail Simone and artist Adriana Melo.

Simone's long-in-development Plastic Man series finally came to life this summer with art by Simone's Birds of Prey collaborator Melo and covers by star artists like Aaron Lopresti and Alex Ross. The six-issue miniseries chronicles the adventures of Patrick "Eel" O'Brian, a petty thief and con artist who ended up with his stretchy, rubber-like powers after being shot in the shoulder and doused with chemicals. Created by Jack Cole for Police Comics #1 back in 1941, Plastic Man was one of the first superheroes to incorporate humor into action stories.

"He's the jester, the joke, the stretchy weirdo," Simone said at the time of the announcement. "He's not credible. He's not reliable. He's...well, he's Plastic Man. "He's like a stretchy Swamp Thing or the bouncy Batman; writing him is a goofy, snarky honor and I'm thrilled to be part of his rubber ribaldry."

The villain-turned-hero character has been a member of various Justice League teams over his comic book history and made his Rebirth return in Dark Nights: Metal. And while the character has never been a solo star in his own right, he's long been a favorite of creators such as Mark Waid, Frank Miller, and Grant Morrison with Simone referencing Morrison's run with Howard Porter as one of her favorite takes on the character and inspiration for her work as well. 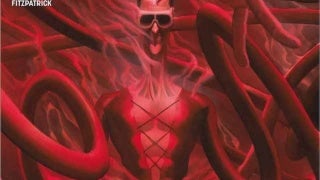 "One of my favorite takes on Plas was from the classic Grant Morrison/Howard Porter run," Simone said. "We are definitely taking inspiration from that, and just pushing it even further for rudeness' sake. Plas is funny, happy, and has enough star power to hold his own against the big guns. He's not afraid of Batman, he's not afraid of Darkseid, he's only afraid of messing up, of going back to being the punk thug he used to be."0comments

You can check out the official solicitaiton for the issue below. Plastic Man #3 will be available in stores and online on August 8, 2018.

Eel went looking for a kid, but he found a Man-Bat instead, who brought him not only to the kid but also to the lair of the secret society that needs Plastic Man to stop asking inconvenient questions. Yes, it counts as comically good fortune if you squint your eyes and look around the corner (which he can totally do without even breaking a sweat. Or, you know, his neck).

Batwoman Recap: Everything You Missed in "Do Not Resuscitate"