DC has provided ComicBook.com with an exclusive preview of next week's Red Hood and the Outlaws Annual #3 from writer Scott Lobdell, with art by Adam Pollina and Dexter Soy. The Annual is just one of a number of such titles hitting the stands this week, as the combination of a fifth week in the month and Comic Con hangover combine to make for an unpredictable week of releases from major publishers. The issue will follow up Bizarro and Artemis, who have been off the board since Red Hood and the Outlaws #25, while Jason Todd has been trying to cope with all the losses in his life.

Lobdell will be following up on one of those losses -- the death of Roy Harper, which took place within the pages of Heroes in Crisis -- in Flash Forward, a miniseries featuring Wally West. West lost control of his powers while under severe stress, which led to the deaths of several people at Sanctuary, a mental health facility for superheroes and supervillains. One of the victims was Harper. You can see the preview pages in the attached gallery, and the official solicitaiton for Red Hood & the Outlaws Annual #3 below. 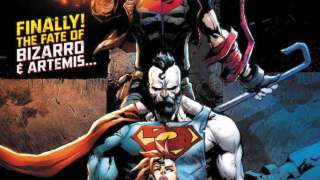 Missing since the fateful events of issue #25, the story of what happened to Bizarro and Artemis after they were sucked through the quantum doorway can finally be told! Trapped in a strange reality where everyone with metahuman abilities has become normal and ordinary humans now possess powers, up is down, left is right and only a pair of Outlaws can save the day in a world gone mad. Meet strange new foes, and even stranger new allies. Can the Outlaws fix this broken world and still make it back to our world and their mission alongside the Red Hood?

Red Hood and the Outlaws Annual #3 will be available in stores and online, wherever comics are sold, on Wedesday, July 31.