DC is wrapping up the "Rebirth" Deathstoke series from writer Christopher Priest, and has provided ComicBook.com with an exclusive first look at the issue, from Priest, Carlo Pagulayan, and the rest of the team that has made the last few years so special. Deathstroke #50 ends the series, which means we can likely look forward to some kind of hardcover collection of Deathstroke by Christoper Priest. The final issue touches down on various elements of the run so far, with character like the Dark Multiverse's Deathstroke and Damian Wayne both playing signifncant roles. The Dark Multiverse version of Slade is especially poginant since one of the series' themes is, basically, that Deathstroke is his own worst enemy.

The final issue manages to do something that Priest has managed to do all along: take the larger-than-life character of Slade Wilson and bring him down to our level without robbing him of the mystery and violence that makes him interesting to begin with. The series also succeeds in making the character relatable for the first time at least since his solo series in the '90s.

"Coming back into the business is a little scary because I haven't written an ongoing series in a long time," Priest told ComicBook.com back when the series began. "So there's some nervousness about failure; there's some flopsweat going on. As far as retreading things, the Deathstroke series is unlike anything I've done before. The only similarities between Deathstroke and anything I've done before is Black Panther, where we're kind of using the same sort of structure. With Black Panther we were using these title cards to break up the scenes and I did that deliberately to evoke that sort of Black Panther sort of storytelling. And the fact that he's really smart. But unlike Black Panther, he is a bad guy and an unapologetically bad guy who runs around and kills people. So it really doesn't mirror anything that I've done before. Part of my goal though was to reclaim ground -- and I mean this with all due respect to writers who have come before me, but to reclaim some ground for Deathstroke that Deadpool had taken from him. Because Deadpool is the echo of Deathstorke, not the other way around. And we don't want Deathstroke to look like he's some kind of ripoff of Deadpool but Deadpool is huge now. He's huger than huge. I don't even work for Marvel and let's just say Deadpool's been very nice to me lately. So I definitely had a conscious goal to reassert Deathstroke as his own man, as his own character in a unique way. He's not at all funny. There's humor in the book but Deathstroke himself is not. He has no sense of humor, and it is nothing at all like Deadpool." 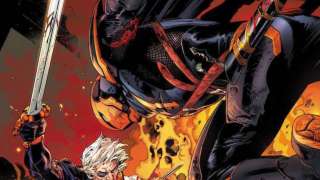 Here's the official synopsis for the issue: "(W) Christopher Priest (A/CA) Jason Paz, Carlo Pagulayan
It all comes down to this. With the fate of his family hanging in the balance, the real Slade Wilson must take on his most dangerous foe yet-himself!"

For those who can't yet accept that it's over, take heart. There's almost a month left before the final issue ships. You can get Deathstroke #50 on the stands or online on December 4.

Ben Affleck Says He Did Batman for His Kids: "Worth Every Moment of Suffering on Justice League"

George Clooney Reveals What He Learned From Batman & Robin