We've all been there - at work, on your phone, and that Pokemon craving hits. It happens. Luckily, there's a new bot called PokeWorld that lets you take part in those epic adventures in a little more casual fashion.

With Pokemon GO and emulators galore, there's a little Pokemon to be found everywhere. But for those that want to enjoy a simplified version of the adorable franchise, whether for simple enjoyment or in a professional environment, the strippped-down version of the infamous franchise is available while using Discord. To utilise this particular bot, you can do one of two things:

1) Link in directly to the PokeWorld server

2) Invite the PokeWorld bot into your own server of choice. 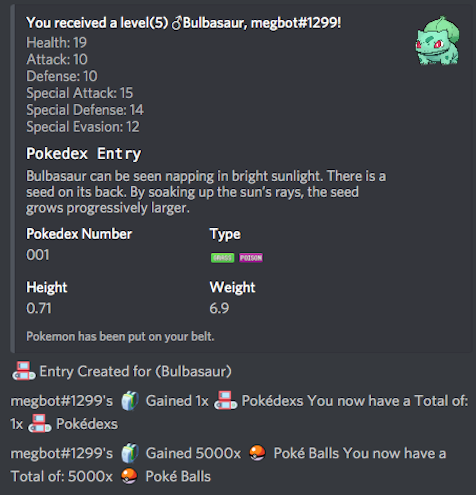 Bioblaze Payne is a programmer from California and the mind behind this Poke-centric modification. When he first created the bot, it had all of the original 151 Pokemon. Bioblaze told The Verge in a statement that it was simply a proof of statement during the bot's prototype phase to show that it could be done. When the public's interest flared, Bioblaze quickly set to work on upgrading the basic capabilities into something much larger.

"Currently on Discord, the concept of a game is more or less something with a random number generator, or randomly pulling from a list. Some do store stats, and information. But none of them are really what you would call a Fully Functional Game."

Like a book, the experience requires imagination for immersion, rather than in-your-face visuals. The project quickly took off and now the Discord-dwelling game houses over 22,000 active participants. With improvements being made around the clock, the creator stated that he wants to revamp the entire infrastructure to more of an MMO feel.

"Since Discord is more or less made for gamers, and the servers are aplenty, I felt like Discord is the new IRC. I wanted to bring a part of my childhood, of my history, back into the world, and rekindle that feeling I had back on IRC, with everyone I knew."

PokeWorld is available now to Discord users, a free-to-use team chat platform for gamers worldwide! To check out the bot for yourself, you can download it here.