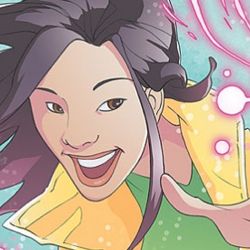 It may seem hard to believe, but the character of Jubilation "Jubilee" Lee will turn 20 this May. Having first premiered in Uncanny X-Men #244 in 1989, Jubilee would be present to help usher in the 1990's era of one of Marvel's most popular series. Dressed as a mall rat, oversized yellow coat, sunglasses and big earrings ever-present, and with valley girl speak, Jubilee was the perfect fit for this new era.

It's slightly ironic that this article is coming about just shy of this two-decade marker. In this month's issue of New Warriors, the series' last, Jubilee, now in the guise of super-strong Wondra, bid good-bye to the printed page once again. That seems to be the story with Jubilee, never fully developed, always just shy of the potential Chris Claremont and Marc Silvestri started her with back in that late 80's mall.

Jubilee's powers started with her being able to project dazzling explosions of plasma, what she commonly called 'fireworks'. The years she spent pre-Generation X, the teenage team she would become a member of in 1997, showed her power's explosive and destructive ability, along with the blinding effects they naturally had when a firework goes off 20 feet in front of you. She even used her powers to help Wolverine escape the murderous Reavers in the Australian Outback. 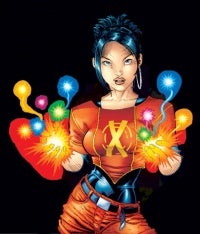 As she progressed more and more in the various X-Men books, especially with the beginning of the Phalanx Covenant storyline, the writers had her questioning her own powers and contributions to the team. It seems odd that they would have this identity crisis come about, especially after Jubilee had already fought with the X-Men, and Wolverine, against foes such as Omega Red, Sabretooth, the Brood, Mojo, the Sentinels, Sauron and even displayed skilled combat against the Hand. Does this provide a nice bridge to unveiling Generation X, yes. Did it feel a bit like cheating Jubilee, yes.

Coinciding with these displays of power in the X-books, Jubilee was also a featured character in the X-Men animated series, playing the main vehicle that introduced the audience to this high-powered group of mutants in the first episode. Again, her destructive powers and courage were a large focal point of the show, and even though the show premiered in the early 90's, it lasted several years, with Jubilee maintaining her level of power in this instance.

It was also during this time that she began appearing more and more in Wolverine, making frequent appearances with her surrogate father in his adventures, her powers often proving to be a help to Wolverine and his many global adventures.

So what happened? After joining Generation X in 97, the artwork used to demonstrate Jubilee's powers made it seem that she was throwing jacks at people, rather than using a true, destructive power. Also, the fact that she was in the X-Men before and could have developed as more of a leader for the team was largely left to the background. Emma Frost, her teacher, stated that Jubilee had untapped abilities at the atomic level, indicating high levels of power. Not until the series was past the halfway mark, around issue 40, did they start to explore this side of her more, with storylines such as "Operation: Zero Tolerance" and the death of Gen X'er Synch. By this point though, the original creative forces behind the book had left, and the series was cancelled with issue 75.

What was next for a mutant who had once been dubbed, by futuristic X-Man Bishop, "the last X-Man."? It was off to LA to try and make it as a movie star! After this, she was found crucified on the X-Men's lawn and saved, along with several other mutants, by Angel's healing power (?). After becoming part of Havok and Nightcrawler's team, she was not included in the next roster Cyclops picked for team make-up. Once again, she appeared on the scene just to be asked to leave.

It seems strange that Marvel would continually keep this character around, only to keep her at arm's length when it comes to power and position in their universe. They had another go at it with Jubilee, a 2004 Robert Kirkman series that was released along with other solo series featuring X characters. After that ended with six issues, Jubilee went mostly unseen, falling more and more from where she started years ago. Oddly enough, it was around this time that she was featured as a playable character in the widely popular game X-Men: Legends. 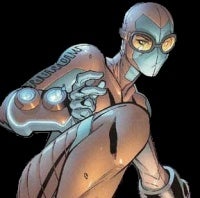 Soon after, the events of M-Day hit, and Jubilee was among the scores of mutants to lose her powers that day, the scene of her skating through an abandoned Beverly Hills mall and realizing that she is powerless bringing her back where she started. Would this be the end of the line for Jubilee, this symbolic setting seeming to bring an end to her role in the Marvel universe?

Making another appearance, this time in the two series Generation M, focusing on de-powered mutants, and Wolverine: Origins, where she was used as bait to lure Wolverine, Jubilee was back on the radar, but once again, in a position of less power, although the character had matured quite a bit. After being rushed off for medical attention, we wonder what happens next.

She is resurrected once more, this time serving as field leader and overall drill-sergeant for the newly formed and rogue New Warriors. Her explosive powers gone, she was outfitted with power gauntlets that granted her super strength. Calling herself Wondra, Jubilee and the New Warriors seemed poised to emerge as the new, subversive force in Tony Starks pre-civil war world. Alas, after 20 issues, this incarnation of the character has ended as well. Probably the most mature and driven portrayal she's ever received, it's no surprise this series is over. Another almost opportunity, another close call.

It perhaps seems strange that a character with his widespread a history with this many appearances in comics over almost 20 years is where she is today. If history tells us anything though, it's that Jubilee will probably appear in some form again in the future. The character's personality, grit and growth have shown that she's loved and seen as useful by comics writers, and maybe we'll be revisiting her in another 20 years. Maybe in her next incarnation she will have a huge reason to celebrate.

A 'Jubilee' 20 Years in the Making: One Character's Journey