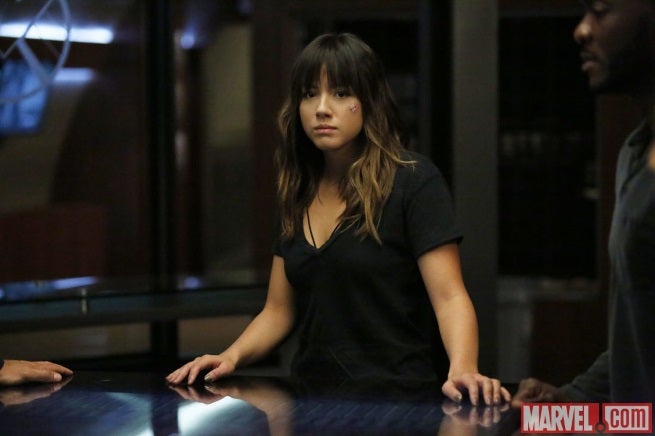 Mack is driving a remote control version of Lola, with a Coulson figure inside. It runs into Fitz. Mack says he made it for Coulson, to convince him to let him work on the real Lola. Mack notices Morse and Hunter laughing together and says a storm is coming. Fitz says he needs Mack's help with Simmons, and Mack says Fitz has to talk to her.

Simmons has patched up Trip, who says the Doctor was out of his mind until Skye walks in. She tells them to get ready, but expresses that she's worried something bad is coming.

Coulson assembles the team and tells them Hydra has a weapon. Morse says they were developing an extinction level weapon. They still don't know the exact location of the temple, but they found the underground city in Puerto Rico. Coulson plans to destroy the temple before Hydra can get to it.

Koenig reports into Coulson. Coulson says the not-May is Agent 33. Koenig says this is the first they've seen of Hydra since Raina went free. Coulson says he'll send an extraction team, with May.

May and Skye are both watching the reports of Senator Christian Ward's death, and are both sure Grant Ward did it. Coulson comes and fills them in that they're splitting the team up to interrogate Raina. Coulson sends Skye with May, and tell May, privately, he's trying to keep Skye safe from her father.

Morse asks Simmons about how long she and Fitz were a thing. Simmons tries to deny they ever war, but Morse knows there is more there. She can tell the damage to Fitz isn't the only thing bothering Simmons, but also what he said at the bottom of the ocean. Simmons says Fitz was in a coma for nine days, and all she's ever wanted is her best friend back. Morse says she's never had a friend turned more than friend, just long rides from the word go. She encourages Simmons to be honest with Fitz.

The teams split up. Skye abruptly hugs Coulson. Mack approaches Morse about begin back with Hunter. He says her personal life is none of their business, but wants to know if she's bringing Hunter in on "the other thing" since they lost Hartley, but Morse insists they don't.

Morse and Coulson are in Puerto Rico, meeting one of Morse's contacts, named Diego. He's late. Morse seems concerned with Coulson's intentions towards the weapon. He insists he's not Fury, and that he's here to destroy the weapon, not recover it.

Mack and FitzSimmons are on the Bus. Mack leaves to check the landing gear and escape the awkward silence. Fitz says he's going to leave the lab so that Simmons can lead the science division. Fitz will go to the garage with Mack. He says he can work for Simmons, just not with her.

Hunter leaves Skye with Raina. They discuss why Whitehall might want Raina. When Raina learns that Whitehall has the device, she realizes that Hydra wants her to hold the Diviner. Raina says she can, and that the Doctor believes Skye can as well. Raina runs toward the Hydra agents, bu May runs over them with a van. Agent 33 sees this occur, and informs Whitehall that Raina has a tracker on it. He says he'll get his best man on it.

Koenig explains what happened to Agent 33 to Trip. There are two of them. Koenig jokes that there are 13 of them. May fills in Coulson on the extraction, and what Raina said. Morse says that Diego won't help, he's scared of the legend.

Simmons tells Fitz and Mack the legend of the Devil's Sentry, and that several guards simply vanished from the impenetrable fort. Fitz deploys several dwarf drones to explore a tunnel underground, but the dwarves fail.

Raina apologizes to Skye for trying to run. Raina says that the Doctor delivered Skye. She says that he's emotional and violent, but also misunderstood. Raina says she met the Doctor in Thailand. She was running with a "freak" gang and was taken in by the Doctor.

Raina tells Skye that they're special, not alien, but human with the potential to be more. She says the Diviner is alien, and says they come from a group of people who believe in a legend about blue angels called the Kree. The Diviner leads the worthy to the Temple, where they will inherit the Earth.

Mack heads down as Skye tries to get ahold of Coulson to warn them not to enter, but their communications are jammed as Whitehall's ship tails them. He plans to board to take Raina. Mack gets to the bottom of the hole. Electronics do not seem to be working. He sees the dwarves, and then alien writing on the ground beneath. He touches it and it begins to glow, and then appears on his hand as he screams in pain. They pull Mack up. He is convulsing. He tells them to run, and then knocks Coulson across the room.

Ward board the plane with Hydra agents. Raina agrees to go with him, but he says he's taking Skye as well, that he plans to keep his promise. Morse fights Mack, but he doesn't seem to feel pain. Mack grabs Morse by the neck and doesn't fall after too shots with an I.C.E.R. Skye agrees to go with Ward. Raina reminds Skye to bring her tablet with the map of the city. Coulson's team barely manages to fend off Mack until Morse uses both stun batons on him, and he falls into the pit. Coulson orders them to seal it up.