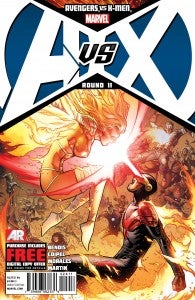 Marvel Comics has released a two-page preview of Avengers vs. X-Men #11, out next month from the creative team of Brian Michael Bendis and Olivier Copiel. When ComicBook.com spoke to Bendis back in June, he told us that there was an event in this story--implied to be a death--that would set the Internet on fire. "Eleven in particular is one where I'm going to have to unplug the Internet for a while and not be part of the conversation…cause it's gonna get loud!" Said the writer. "I don't know if it's going to be Hawkeye bad, but something happens where I would…yeah."

The biggest comics event of the summer hits it's red hot penultimate chapter as Marvel is pleased to present your first look at Avengers VS. X-Men #11! From the creative tour de force of Brian Michael Bendis & Olivier Coipel, the Avengers gather together to take on the remaining hosts of the Phoenix Force with the aid of Charles Xavier! Can the combined might of Earth's Mightiest, Professor Xavier, the Scarlet Witch, Hope and more put an end to their reign once and for all? Which team will reign supreme? Join the conversation on Twitter with #AvX! Here comes the pain as all your favorite super heroes enter the battle—and only one team will emerge victorious! Don't miss out Avengers Vs. X-Men #11, an extra sized issue at no extra cost, on sale this September in comic shops everywhere, on the Marvel Comics app, and the all-new Marvel Comics Webstore! For more on Avengers VS. X-Men, please visit https://avx.marvel.com AVENGERS VS. X-MEN #11 (JUL120528) Written by BRIAN MICHAEL BENDIS Penciled by OLIVIER COIPEL Cover by JIM CHEUNG FOC – 8/20/12, ON-SALE – 9/12/11