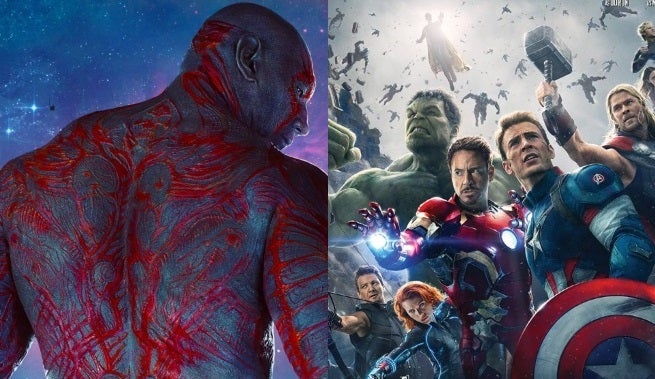 Avengers: Age of Ultron is premiering in various locations around the world leading up to its theatrical release, and some of Marvel's other franchise talents have been appearing on the red carpets.

One such star is Dave Bautista, the ex-WWE Superstar who plays Drax in Guardians of the Galaxy. Unsurprisingly, Bautista hopes to see the two Marvel Studios superhero teams share a screen sometime down the line.

"Strictly as a fan boy I hope that the worlds collide and we get together with the Avengers," Bautista told Metro.

Bautista will probably get his wish. Many fans expect to see the Guardians of the Galaxy become involved with the Avengers' struggle to defend Earth sometime during the event of Avengers: Infinity War.

Avengers: Age of Ultron opens May 1. Guardians of the Galaxy is scheduled to open in theaters May 5, 2017, with Avengers: Infinity War Part 1 expected to follow almost exactly one year later, May 4, 2018.