When Universal Pictures announced yesterday that the upcoming film adaptation of the popular E.L. James erotic novel Fifty Shades of Grey would come to theaters in 2014, we didn't give it much mind; after all, Stephen Amell has counted himself out of the lead role and other than him, there wasn't a reason why comic book fans would be particularly interested in the news. Well, maybe there is. The film--widely expected to be a blockbuster hit--will come to theaters on August 1, 2014, meaning that it will square off against Marvel's Guardians of the Galaxy at the box office in their shared opening weekend.s This seems to be a more and more common thing to do, as franchises have taken over Hollywood and there's less development time to come up with original concepts. Also, of course, there's the fact that the mid-budget dramas and comedies that used to provide a low-cost, high-margin product for Hollywood seem to have mostly evaporated, leaving only micro-budget specialty films and massive spectacle-style movies for most of the summer. 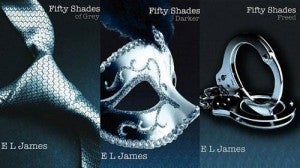 Last weekend was expected to be the first time in box office history that three movies all made $50 million in the same weekend--and while Man of Steel disappointed on that score, Monsters University and World War Z did better than expected to make up the revenue. While it used to be that a massive film like Man of Steel would get a little "breathing room" so as not to flatten the competition in its path, those kinds of practices are largely gone from the box office. The week before Fifty Shades and Guardians open, fans will get both The Rock's Hercules movie and Jupiter Rising from the Wachowskis. The week before that is a Planet of the Apes sequel and the second film in Disney's planned Planes trilogy. The week before that? Fast and Furious 7. While it's hard to imagine a niche drama making a big dent in Marvel's seemingly-impervious hide, Fifty Shades of Grey is the kickoff of a franchise for Universal and will get a ton of marketing behind it. It's also a global phenomenon the likes of which come along rarely. Even looking at something like next month's big Grown Ups 2/Pacific Rim showdown isn't exactly the same thing, although seeing how that pans out might give Disney a sense of what to look for when it comes to opening your expensive, genre epic against a comparably cheap movie with a built-in audience.

Fifty Shades of Grey To Open Against Guardians of the Galaxy